Would you survive a zombie outbreak?

CDMPS was approached by Xbox to simulate how a zombie outbreak would spread across Australian and New Zealand cities.

In the event of a zombie outbreak, our research suggests that Perth would be the fastest to succumb, with nearly 100 000 people infected in the first four days. Meanwhile, residents in Darwin would be most likely to survive, with a flesh-eating disease spreading at half the speed of the west coast.

“You need to build a defensive ring around the source of any attack to overpower the zombies with numbers, because if you miss that chance they will just overpower everyone as long as they have contact with a population,” warns Professor Greg Foliente, Deputy Director of CDMPS. “Alternatively, if you have enough warning, disperse as fast as you can.”

Our modelling gave major cities across Australia and New Zealand a ‘Zombie Survival Index’ (ZSI) ranking, based on how well they would handle a life-altering outbreak. The safest city is Darwin, followed by Queenstown in New Zealand, Melbourne, Sydney, Perth and Auckland, which claims the title of the most dangerous city in Australia and New Zealand, should an outbreak occur. The ZSI rankings were based on a variety of criteria, including the potential rate of zombie infection, situational analysis of the infection’s origin, how the disease would spread, how residents claim they would act, and how well each city would defend themselves against the walking dead and geographical location. 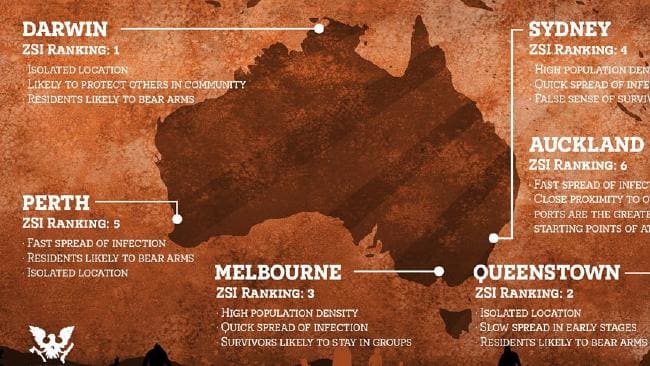 A few key conclusions from our work include:

Read the pursuit article for more information: The Hard Science Behind Surviving a Zombie Attack

This work was commissioned by Xbox Australia to model the fictitious spread of disease throughout Australian cities to mark the launch of new video game State of Decay 2.