An access scholarship is helping Malaysian students overcome financial disadvantage and giving them the opportunity of a world-class education. 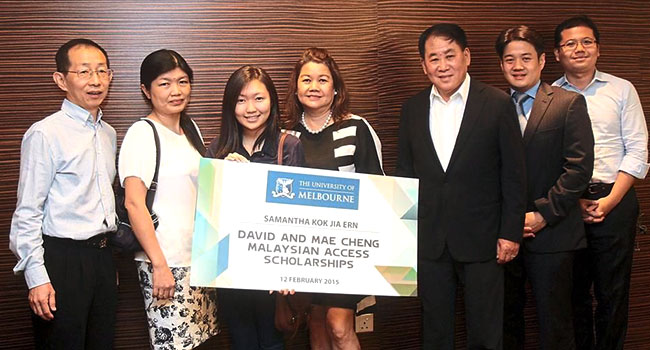 Dato’ Cheng paid homage to his parents with the scholarships, naming them the David and Mae Cheng Malaysian Access Scholarships. Two scholarships are awarded each year to Malaysian students who either suffer economic disadvantage or come from a remote part of the country.

The scholarships cover study costs for the three-year Bachelor of Commerce and are believed to be the first access scholarships provided exclusively to international students.

Dato’ Cheng understood the need to support bright young students, noting the opportunity that a University of Melbourne education provides.

“I really enjoyed my time at the University,” he said.

There is an equality and fairness in Australia that was partly the reason for us introducing the scholarship.

The first Cheng Scholarship recipient is Samantha Kok from Kuala Lumpur, who began her first semester at Melbourne in March 2015. Ms Kok originally had to defer her studies for a year, as her family could not afford her tuition fees. An email from the University encouraged her to apply for the scholarship, giving her newfound hope. She said the Cheng Scholarship meant she would not have to enrol at Melbourne via a private university path.

Ms Kok’s successful application relied largely on her clearly defined accountancy ambitions, which would have been remote without a Melbourne education.

Professor Paul Kofman, Dean of the Faculty of Business and Economics, said the Cheng Scholarships amply demonstrate Believe - the Campaign for the University of Melbourne’s wider commitment to creating more scholarships for the best and brightest students.

“I was delighted that Dato’ Cheng’s wish to assist Malaysian scholars fit so well with the Faculty’s commitment to supporting deserving international students,” he said.

“It continues the wider campaign of ensuring the most talented students come to Melbourne, regardless of their financial or geographic circumstances."