This year a total of 110 alumni, staff and former staff have been honoured for their contribution to Australian society in the Queen’s Birthday Honours, two of whom received the nation’s top civilian honour – Companion in the General Division of the Order of Australia (AC). 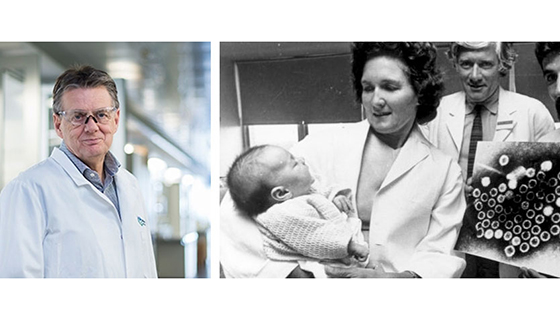 Professor Bishop is an internationally renowned virologist who is honoured for her eminent service to global child health through the development of improved vaccines and for her service to medical research.

In 1973, Professor Bishop led the research team – in collaboration with University of Melbourne researcher Dr Ian Holmes – that discovered rotavirus, later shown to be the major cause of severe gastroenteritis in children worldwide. In 2013 she was awarded the Florey Medal, which honours Australian researchers who have made significant achievements in biomedical science and/or in advancing human health, for the discovery and subsequent work to find a vaccine for rotavirus.

Professor Bishop received an Honorary Doctorate of Medical Science from the University of Melbourne in 2009 and was inducted into the Victorian Honour Roll of Women in 2011.

One of the world’s leading molecular biologists focused on malaria, Professor Alan Cowman AC receives his Honour for his eminent service to the biological sciences.

In his leadership role at the Walter and Eliza Hall Institute of Medical Research, Professor Cowman’s work has been integral to the global malaria research effort and has enabled geographic monitoring of the spread of drug-resistant malaria.

He is a Fellow of the Australian Academy of Science and the Royal Society and has received awards including the Howard Taylor Ricketts Medal for Infectious Diseases from the University of Chicago, the Commonwealth of Australia Centenary Medal and the NHMRC Research Achievement Award.

In the Australia Day Honours, Melbourne alumni, staff and former staff were also recipients of 14 Officers, 51 Members, and 40 Medals of the Order of Australia, along with three Public Service Medals. Areas of service recognised spanned horticultural science, aviation, museums and galleries, social welfare and more.

Congratulating alumni recipients, Vice-Chancellor Duncan Maskell said he was honoured to acknowledge their service and success.

“Our University of Melbourne community takes great pride in the recognition of so many of our fantastic alumni for the valuable contribution they make to society,” he said.