Known as ‘the Pavvy’, the beloved University Oval pavilion has been given a new lease on life thanks to a $6.5 million redevelopment. 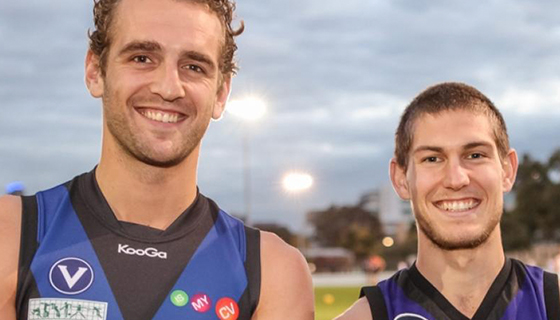 A combination of University and philanthropic support, including almost $1 million in bequests, has helped ensure the Pavvy remains a significant landmark on campus.

Despite overcoming a disastrous fire in 1950, the Pavvy has been a second home for many sportsmen and women since 1906.

University Blues football captain Jack Watts has been at the club since 2006. He remembers the tired, yet loved, old stand.

“The old Pavvy was pretty indestructible and gave us a real home ground advantage,” he says.

“The showers were temperamental – unreliable hot water supplies used to upset our opposition!”

His University Blacks counterpart, Bede Mahon, is equally effusive about the improved training amenities, and the opportunities it will provide its users.

“We’re extremely fortunate to have some of the best facilities in the country outside the AFL,” Mahon says.

The generosity of alumni, AFL Victoria, friends of Melbourne University Sport and former University footballers and cricketers, alongside University support have all made a difference.

In addition, one donor who has fond memories of playing University football has committed to matching donations on a dollar for dollar basis to ensure the Pavvy will continue to thrive for future generations of University sportsmen and women.