Home advantage counted for little in the 2017 Australian Boat Race, with the University of Melbourne finishing behind University of Sydney in the men's and women's races. 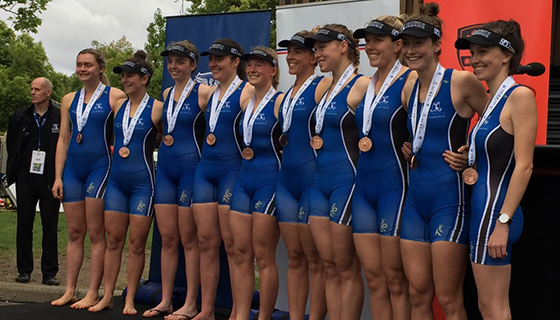 Hundreds of spectators lined the banks of the Yarra River to watch the iconic 4.1km race from Burnley to the boat sheds on Boathouse Drive.

Making his debut, Melbourne men’s eight captain Jackson Harrison said although his crew held their own, they simply couldn’t keep up with their Sydney counterparts.

“There was a lot of hype and nervous jitters on the start line,” the Master of Teaching student said.

“We took about 90 seconds to settle into our pace, which is where Sydney was most punishing. I’m happy with how we performed.”

As the younger crew, Melbourne coach Franz Imfeld congratulated the men on a tough battle.

“I’m pleased with how the men performed,” he said.

“They showed their fitness, but also their lack of experience. Being able to hold their line for the entire race and keep up, rather than let Sydney fly away, was impressive.”

In almost a replica of the men’s race, the women’s eight began with an incredibly close start but it wasn’t long before Sydney, fuelled with desire to break Melbourne’s eight year winning streak, took a commanding lead.

Despite the loss, India McKenzie, women’s eight captain and Bachelor of Environments student, is already looking forward to next year.

“We executed our race plan, but unfortunately Sydney were just the stronger crew on the day,” she said.

“We had a great time preparing and the race just adds fuel to the fire. We look forward to coming up to Sydney next year for another crack at it, and bringing the trophy back to where it belongs.”

In the college races, the glory was shared, with Sydney’s St Andrew’s College winning the men’s eight and Melbourne’s Ormond College crossing the finish line first for the women’s.

Based on the famous Cambridge v Oxford University Boat Race, the on-water rivalry between the two sandstone universities stretches back to 1860 when they first raced against one another on the Yarra River.