Philanthropist Pamela Galli has given medical biology — the cornerstone of modern healthcare and diagnostics — a $5 million boost with the establishment of the Lorenzo and Pamela Galli Chair in Medical Biology at the Walter and Eliza Hall Institute of Medical Research and the University of Melbourne. 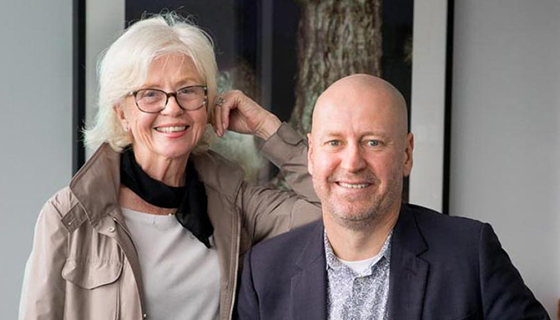 The Lorenzo and Pamela Galli Chair in Medical Biology is the third chair created by Mrs Galli at the University of Melbourne and one of its partner research institutions.

The inaugural Chair will be Professor Doug Hilton AO, a blood specialist and the current director of the Walter and Eliza Hall Institute.

Professor Hilton said the generosity of Mrs Galli was an inspiration to researchers in the Parkville precinct.

“Mrs Galli has put her trust in us to improve health, in honour of her late husband,” Professor Hilton said. “Her support allows us to focus on continuing our mission of translating discoveries in medical biology into better health outcomes for patients.

“In the past century, medical biology has allowed us an unprecedented understanding of how our body works, what goes wrong to cause diseases and how we can treat these diseases. In my own field of research, we’ve already seen revolutionary therapies for previously incurable blood cancers and other blood disorders.

“Mrs Galli’s longstanding support of our research will allow us to accelerate the next stage of discovery and research translation.”

In the context of universities and their partner institutes, a professorial ‘chair’ is a senior research leadership position held by someone who has displayed significant contributions to research and academia.

“With this most recent gift to establish the Lorenzo and Pamela Galli Chair in Medical Biology, Mrs Galli is underpinning the continued successful partnership between the University of Melbourne and the Walter and Eliza Hall Institute. We will work closely together to honour her hope for the future.”

Mrs Galli said that her motivation for funding medical research was both “personal and altruistic.” After losing her husband to skin cancer, Mrs Galli felt strongly compelled to support and advance medical research.

“It seemed appropriate to me that I should encourage medical research into disease after cancer took the life of my dear husband Lorenzo,” Mrs Galli said.

“I am convinced that the basic research and translation done at the Walter and Eliza Hall Institute are the backbone of future medical breakthroughs.

“I am impressed by what I observe of Professor Hilton’s research into blood management and I am impressed by his leadership of the Institute, his encouragement of outstanding young researchers and by his very real responsibility for the legacy from his predecessors.”

The Lorenzo and Pamela Galli Chair in Medical Biology is the latest philanthropically-funded endowed Chair given through Believe – the Campaign for the University of Melbourne.