Flos Greig didn’t just break down barriers for women in law, she granted them admission into the field. Today, her legacy continues to remind us how women’s stories are important catalysts for change.

After graduating from Melbourne Law School (MLS) in 1903, Flos became the first woman to graduate with a law degree in Victoria – and overcame extreme adversity in doing so.

Upon graduating, Flos said “women are men’s equals in every way and they are quite competent to hold their own in all spheres of life.” She went on to undertake her articles with Frank Cornwall, and later continued her career with Cornwalls law firm.

“Flos was one of five remarkable sisters who emigrated from Scotland in 1889,” said Iola. “They made a pact that they would go to university, have a career, and not marry – because it was almost impossible to do both in those days.”

With a vision to honour and celebrate Flos’ pioneering spirit that enabled women to be admitted to the Australian legal profession, the inaugural Flos Greig Lecture took place on 19 August 2022.

Held in the historic State Library Victoria, the event saw MLS alumni, MLS Foundation Board members, Cornwalls staff and guests, and descendants of the Greig family come together.

Attendees connected with one another, shared stories, and listened to the keynote speech about extraordinary women.

Deputy Vice Chancellor (People and Community) Pip Nicholson, formerly the Dean of MLS, worked to establish the Flos Greig Lecture during her Deanship.

In a first for the school, Professor Nicholson was eager to establish a public lecture exclusively named in honour of a woman. 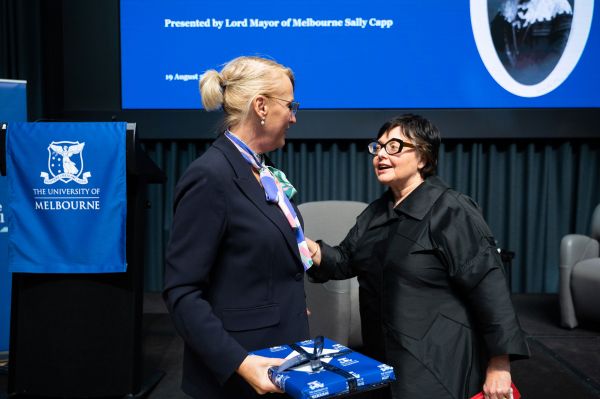 “It seemed to me that in the 21st century, our lecture series ought to be more diverse, while also celebrating Flos Greig's legacy,” she explained.

Professor Nicholson wasn’t the only one reflecting on Flos’ legacy. When MLS alum, and former advisor to Cornwalls, Robyn Campbell, approached her about naming a lecture series in honour of Flos, Professor Nicholson seized the opportunity.

“Robyn asked if the law school had an interest in meeting with Cornwalls, and I said, ‘an acute interest’, because I too had been grappling with this issue of how to memorialise and celebrate Flos' achievement and contribute to the diversity of our program,” said Professor Nicholson.

The rise of female voices

The inaugural keynote lecture was delivered by Sally Capp – Lord Mayor of Melbourne, MLS alum, and a former solicitor and business owner.

Mayor Capp’s address opened with a reflection on the most recent federal election – deemed ‘the women’s election’ by many – as it was influenced by more women’s voices than ever before.

She highlighted that without women like Vida Goldstein, one of the first women to stand for Federal Parliament in Australia, we would not have been able to witness the progress we see today.

“Vida was revered internationally as the leader of the women’s suffrage movement,” said Mayor Capp.

“She lost her campaign to be elected into Federal Parliament, and she then tried four more times, paving the way for people like Enid Lyons and Dorothy Tangney to become the first women representatives in Australian Parliament in 1943.”

Mayor Capp went on to explain how Goldstein championed conversations around wage equality, women’s protections against domestic violence, women’s rights in the workplace and the representation of women in political arenas.

“She did this so brilliantly, but what's shocking is that those issues are still at the top of our agendas today,” she reflected.

Along with shining a light on women who helped shape Melbourne, Mayor Capp also shared her own journey to becoming Lord Mayor. 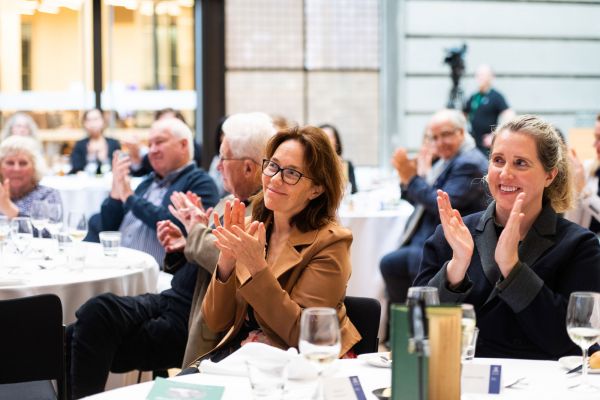 Attendees  were captivated by the Lord Mayor's key note address.

“I was lucky enough to be brought up in a family and in a school environment that empowered women to question things and to have a go,” she said.

Mayor Capp harnessed this spirit to rise to senior positions at both KPMG and ANZ, become the first female board member of Collingwood Football Club, and eventually become the first woman to be directly elected as Lord Mayor.

“It was crystal-clear in my mind that instead of sitting on the sidelines and complaining, it was time for me to be part of the change,” explained Mayor Capp, “that's what motivated me to put my hand up to become Lord Mayor in 2018.”

Throughout her talk, Mayor Capp remembered Flos Greig’s achievements and motivated those in attendance to reflect on how they can honour her legacy.

“It is hard to believe that when Flos walked into her first lecture, with all of the usual first day nerves and concerns of the unknowns, she faced a future where it was not possible for her to practice what she was studying,” said Mayor Capp.

“She opened doors for Australian women like you and me, wanting to study and practice law. She did it right here in Melbourne at the Melbourne Law School.”

For Iola – who attended the event with her family – drawing inspiration from her great aunt is a practice that she has already instilled in her life.

“I have been inspired by the Greig sisters’ determination to break into male-dominated areas and fight for women’s rights. I was a co-founder of the Women’s Electoral Lobby and worked in journalism when there were very few women there,” said Iola.

“And although I did not study law, while working at the Australian Council of Trade Unions, I became an advocate and won the Parental Leave test case and equal pay cases for childcare workers and clerical workers.”

Looking to the future, current Dean of the Melbourne Law School, Professor Matthew Harding, knows the Flos Greig Lectures will continue as a rich vein of intellectual activity. 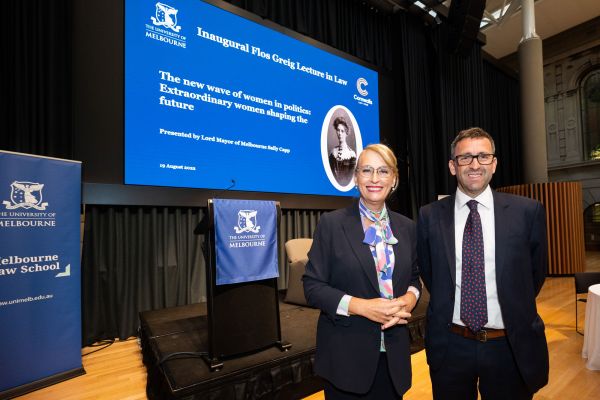 Fundraising has begun to establish the series in perpetuity, and MLS has set out to raise $250,000 over the next five years to achieve this goal.

MLS is grateful for Cornwalls’ generosity and leadership, but what makes the partnership even more special is the joint commitment to see the public lecture realised in perpetuity.

“We've got nothing but appreciation for Cornwalls and their leadership,” said Professor Harding.

Give to the Flos Greig Lectures

Gifts towards the Flos Greig Fund will establish this important new series in the long-term. To make a contribution of any amount, please click here.

If you wish to discuss your gift, please contact Kim Brockett, Development Manager, Melbourne Law School on +61 3 8344 6021 or kim.brockett@unimelb.edu.au