A tiny device is helping paralysed people regain connection with the world through text, email, shopping and banking online. It’s thanks to the work of Associate Professor Thomas Oxley, a dedicated team of researchers, clinicians and engineers, and philanthropic support for critical stages of developing this world-first technology.

Philip O’Keefe and Graham Felstead were diagnosed with motor neurone disease, a progressive condition that effects the nerves that control movement, gradually causing the muscles to deteriorate.

However, they were able to regain some functionality as two of the first participants in the human trial of the Stentrode, a matchstick-size device that enables patients with paralysis to operate digital devices with their minds.

The results from the Australian study, called SWITCH, were presented earlier this year at the American Academy of Neurology Conference.

The device is developed by Synchron – the brain computer interface company founded to translate the idea – in collaboration with researchers from the University of Melbourne in partnership with the Royal Melbourne Hospital and the Florey Institute of Neuroscience and Mental Health.

Based on research conducted by a multi-disciplinary team of over 40 medical and bioengineering specialists, led by Associate Professor Oxley and Professor Opie (co-heads of the Vascular Bionics Laboratory and co-founders of Synchron), the Stentrode technology is implanted next to the brain’s motor cortex, which controls movement, where it translates neural information into onscreen commands, like click and drag.

Reading brain signals to operate external devices isn’t new – electroencephalogram (EEG) head caps with metal sensors attached have been used for decades. But the Stentrode bypasses the need for complex brain surgery where electrodes are inserted directly into the brain, which generally degrade and fail after six months.

Instead, the small device is embedded with electrodes and placed in the blood vessel, where it self-expands to conform to the curvature and diameter of the implanted vessel, securing it in place for use in everyday life, says Associate Professor Oxley

By using the blood vessels as the natural highway into the brain, we can access areas that traditionally required open surgery and removal of skull in multiple locations.

With over 30 million people suffering from paralysis, the potential to positively impact humanity on a vast scale is huge. And that reality is only getting closer.

Synchron is now leading the field of implantable brain-computer interfaces (BCI), winning the BCI Award for 2021 and the Society of Vascular and Interventional Neurology (SVIN) Innovation Award, and being named among TIME’s Best Inventions of 2021 and Fast Company’s Next Big Things in Tech. The company has raised a total of AU$97 million, including AU$52M venture capital funding, and US clinical trials have enrolled the first patient at Mount Sinai Hospital in New York, with first patient implant scheduled this year. 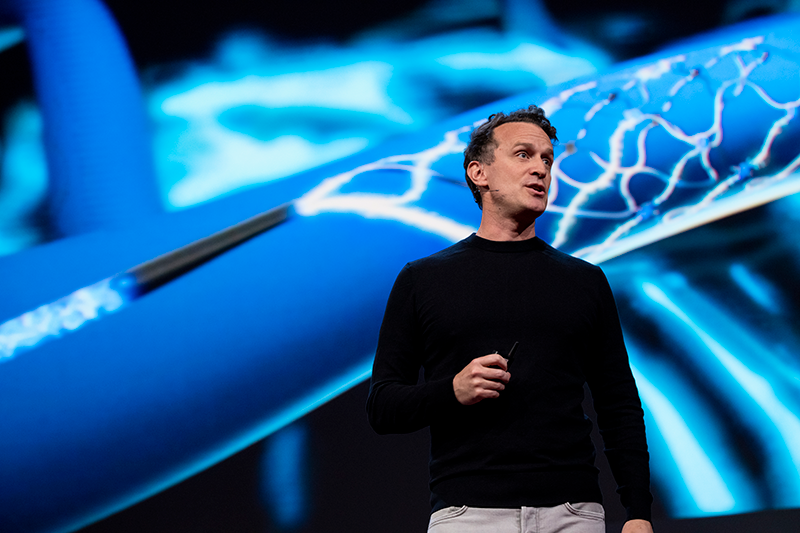 Associate Professor Oxley also gave a TED Talk this year: A brain implant that turns your thoughts into text, which received over half a million views in a week.

“These trials pave the way toward a first FDA approval for a permanently implantable brain-computer interface, a critical step to realising the therapeutic potential of this emerging industry,” says Associate Professor Oxley.

“Getting the technology to the clinical stage where it is actually helping someone is what we dreamed about when we started out.”

A journey of education and inquisitiveness

So how did this life-changing device come to fruition? It might be best described as a combination of curiosity, collaboration and dedication to study – supported by several scholarships and fellowships.

The idea for the Stentrode – or using the blood vessels to enter the brain over open surgery – was explored by Associate Professor Oxley as a University of Melbourne PhD candidate in 2011. During this time, he received the Leslie Eric Paddle Scholarship in Neurology, an opportunity made possible by a gift in Will from the late Leslie Eric Paddle.

But the foundations for this technology reach even further back.

With a long-standing fascination with the brain and how this organ could “create consciousness”, Associate Professor Oxley first pursued psychiatry. He then took the path of medicine, and around 2007, as an undergraduate at Monash, became interested in interventional neurology.

“I heard about a technique that involved pulling out blood clots that caused stroke,” he says. “It seemed obvious to me, back then, that interventional neurology was going to be a mainstay of medicine in the same way it happened in interventional cardiology.”

Other key moments during his education also stand out as laying the groundwork and foundation for this world-first technology. There was the paper Associate Professor Oxley read in 2008 by Dr. Leigh Hochberg on the first brain computer interface trial in a human, and learning about motor cortex electrophysiology from his honours in transcranial magnetic stimulation.

It was in 2011, after completing his Bachelor of Medicine and taking a year off to consider next steps, that the Stentrode was given wings. Thanks to a fortuitous meeting with the US Defense Advanced Research Projects Agency (DARPA), the project received its initial investment.

I shared my idea to use blood vessels to enter the brain and they said if I could put together a team, they would give me a million dollars.

Securing that initial investment, triggered a further development grant of $2.2 million from Australia’s National Health and Medical Research Council, and now serious work could begin. By 2016, Synchron had the winning design and began pre-clinical trials in sheep, deemed a success, and focused their attention to clinical trials.

“Thanks to coordination from Professor O’Brien and an ecosystem of expertise and facilities, we were able to into access some of the world’s best medical and engineering minds in one place,” Associate Professor Oxley says.

“By bringing together neurointerventionists and neurosurgeons, coders, engineers and other disciplines, the concept started to become a reality, and it was very exciting to see it all come together.” The Stentrode™ is a tiny electronic device that is implanted into the brain. Picture: Supplied

Now, with in-human trials ongoing in Australia and US, having secured AU$52 million through Khosla Ventures and USD$10M from the National Institutes of Health (NIH) – the Stentrode is remarkably close to becoming the first commercially available permanently implantable brain-computer interface.

“This is a breakthrough moment for the field and we’re excited to have delivered a fully implantable, at-home, wireless technology that doesn’t require open brain surgery, which we hope will one day restore freedoms for millions of people with severe disability.”

This success didn’t come from nowhere, of course. It’s the result of deep curiosity and a lot of work on Associate Professor Oxley’s part, collaboration with world-leading experts, and a vast education supported by generous philanthropic opportunities from donors similarly passionate about advancing research.

“I am incredibly grateful for the opportunities and support the fellowship and earlier scholarships enabled. We're so close now to improving millions of people's lives, and it really wouldn't have been possible without the support from the University of Melbourne I received in those early research years,” said Associate Professor Oxley.

Read more about biomedical research supported by philanthropy in Fostering the future of bionics.