The Nobel Peace Prize 2017 has been awarded to the International Campaign to Abolish Nuclear Weapons (ICAN), which involves a number of University of Melbourne academics. 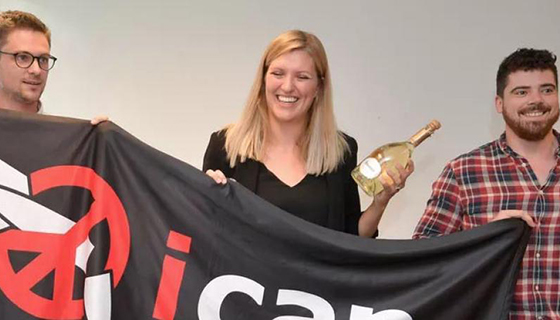 Associate Professor Tilman Ruff from the Nossal Institute for Global Health has played a crucial role as Founding Chair of ICAN, an international coalition described by the Norwegian Nobel Committee as “the leading civil society actor in the endeavour to achieve a prohibition of nuclear weapons under international law”.

A number of other University academics have contributed to the campaign, including Emeritus Professor Fred Mendelsohn, Professor Richard Tanter and Professor John Langmore who have played key leadership roles. Tim Wright, ICAN’s Melbourne-based Campaign Director, is also a Melbourne alum.

The late former Prime Minister Malcolm Fraser was also a keen supporter, helping to launch the campaign and serving as its first Patron.

Professor Glyn Davis, University of Melbourne Vice-Chancellor, said it was an honour to congratulate Associate Professor Ruff and his colleagues, who feel passionate about nuclear weapons proliferation and have been prominent and consistent voices seeking change. “The award of a Nobel Peace Prize, just 10 years after the group was formed, shows how grassroots non-government groups can influence global policy,” he said.

“To foster an international consensus against their use is a rare and important achievement.”

Associate Professor Ruff says that the decision to award the Nobel Peace Prize 2017 to ICAN is a timely wake-up call.

"They pose an existential threat to all humanity and our living planet.”

This is the first Nobel Peace Prize to be awarded to an organisation founded in Australia. ICAN was founded in Melbourne, and now includes 468 partner organisations in 101 countries.