A program sponsored by one of the Faculty of Science's longest-serving philanthropic foundations is helping a diverse range of students better understand the frozen world of Antarctica, 70 years after the University first engaged in Antarctic research. 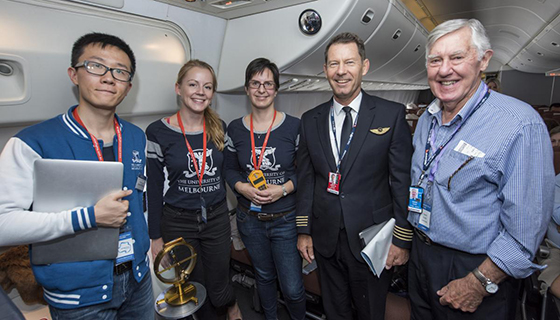 A program sponsored by one of the Faculty of Science's longest-serving philanthropic foundations is helping a diverse range of students better understand the frozen world of Antarctica, 70 years after the University first engaged in Antarctic research.

A flight to the South Magnetic Pole was a feature of this year's annual Laby Fellows program, sponsored by the Laby Foundation. The flight included two PhD students (the Laby Fellows) and 45 Australian and New Zealand secondary students from the 'Classroom Antarctica' program, which has been introducing school students to Antarctic study and science exploration since 2009.

The 12-hour round trip - flown by Qantas Captain and Melbourne alum Martin Buddery - used Geoscience Australia’s coordinates for the South Magnetic Pole to fly the plane directly over the pole, which is currently 300kms out to sea off the French Antarctic territory of Adelie Land. The flight enabled the Laby team to record the event with the School’s historic Dip Circle instrument and other monitoring equipment.

Antarctic research has been undertaken by the School of Physics since 1948, when a group of pioneering postgraduate students (under the tutelage of Dr Henri Rathgeber) travelled to the frozen continent to investigate cosmic rays- high-energy radiation from outer space that may affect electronics, communications and flight. This highly accomplished cohort included Phillip Law (an Antarctic researcher and later one of the founders of the Victorian College of the Arts) and David Caro (Vice-Chancellor of the University of Melbourne from 1982-87).

David Dodd, a Melbourne alum, Antarctic veteran and co-founder of'Classroom Antarctica', said the flights are a rare and valued opportunity to turn the remote and little-understood continent into a lived experience.

"Myself and another Melbourne alum, Richard Lightfoot, began Classroom Antarctica in 2009 to mark the centenary of the first exploration party to reach the vicinity of the South Magnetic Pole," he said.

"Appealing to secondary students has been invaluable, as they return from the 12-hour round trips with an improved understanding of Antarctica, and the motivation to inspire themselves and others to pursue science subjects and possibly science careers.”

More than 270 secondary students have taken the round trip since 1994, as part of an annual sightseeing program sponsored by Antarctic Flights and Qantas.

At a time of increased interest in climate research, the Antarctica flights are an invaluable introduction to the continent.