Author Alexis Wright is leveraging her position as Boisbouvier Founding Chair in Australian Literature to encourage a wider examination of the role of storytelling in community efforts to tackle social issues.

Professor Alexis Wright is well known for asking challenging questions that provoke people into thinking more deeply. In a recent article, she posed an imaginary scenario: what would it mean if we lived in a world without stories? 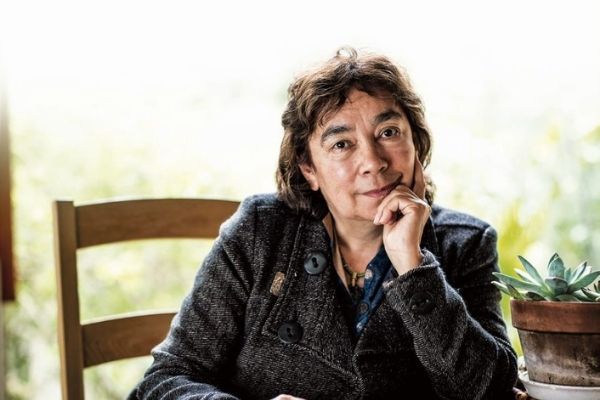 It’s an interesting question, especially as she is a highly successful author who has won both the Miles Franklin Award (Carpentaria, 2006) and the Stella Prize (Tracker, 2017).

Were there no stories being written, Professor Wright suggested, the human imagination would prevail – she hoped we would be brave and cultivate a practice of “whispering stories in our mind”, just as Aboriginal people did on the missions and reserves where they were once institutionalised under state laws. There, they kept their spiritual law stories strong by holding secret gatherings in the middle of the night.

Professor Wright, a Waanyi woman, is the University of Melbourne’s Boisbouvier Founding Chair in Australian Literature, a unique position founded in 2015 thanks to a generous $5M gift from John Wylie AM and Myriam Boisbouvier-Wylie. The role is groundbreaking in the way it is dedicated to inspiring emerging writers, school students and the public to explore the crucial role of literature in tackling social issues.

In imagining the unimaginable – a world without stories – Professor Wright was boldly addressing some of the major problems confronting contemporary writers and thinkers today: the censorship of truth, and how boundaries of indifference, ignorance and vested political interests are being imposed upon us. She describes it as a “huge subject of silencing, the muting of voices, and bullying tactics used to oppress, humiliate, manipulate, create fear and exclude.”

As Boisbouvier Chair, she has been fighting these things creatively, inspiring other writers in the face of great societal challenges.

"Writers are storytellers: their words echo universal felt experiences, adding meaning and purpose at times that feel bereft of both,” said Professor Wright.

As Australians navigate the fragility of this time and work to rebuild a more solid future, local writers will play an important role in telling those stories.

When the Chair was established, as a partnership between the University and State Library Victoria, it was envisaged as involving a mix of teaching and public lectures. Mr Wylie, who at the time was President of the Library Board of Victoria, and Mrs Boisbouvier-Wylie saw it as an innovative way to provide an opportunity for practising Australian authors to advance appreciation of Australian literature, with mentorships and specialised courses for those with a focus on Australian writing, while enhancing Melbourne’s place as a UNESCO City of Literature.

“We hope the Boisbouvier Founding Chair in Australian Literature will make a real difference to how the community understands and appreciates national literature,” Wylie said at the time, when writer Richard Flanagan was appointed inaugural Chair.

What we talk about when talking about the big issues

During her tenure, Professor Wright has participated in dozens of events in which she has challenged writers to be more creative. All this work has been in an era with some extremely difficult scenarios playing out, such as climate change, the COVID-19 pandemic and increasing public consciousness about Indigenous rights.

Professor Wright’s enthusiastic involvement has strongly reflected these aspirations and has had a tangible impact for writers, students and Indigenous communities, while also generating more informed conversation around these urgent topics. In 2020 alone, as Boisbouvier Chair, she received more than 250 invitations worldwide for writing, speaking and teaching engagements, granting her an opportunity to consider how best to distribute Australian literature across the world.

"It’s about how we understand each other,” said Professor Wright.

Literature is the heart and soul of each country and can help develop greater understanding.

Along with the many workshops and events she has participated in as Chair, Professor Wright has given high-profile public keynote addresses, lectures and masterclasses, while also mentoring and writing for several publications. A significant highlight has been a series of podcasts involving four distinguished Australian authors, Signposts: Stories for our Fragile Times, launched by the University and State Library Victoria. Shining a light on the role of Australian literature in times of crisis, it involved Professor Wright leading intimate conversations with authors Peter Carey, Nicholas Jose, Christos Tsiolkas and Melissa Lucashenko.

Professor Wright said that the program offered “valuable discourse about the power of creativity” in a crisis.

Witnessing to a wide community

Other involvements as Chair have included seminars and workshops in various schools of the University, and involvement with events as diverse as the Cairns Indigenous Art Festival, a screening at the Dondale Detention Centre in the Northern Territory, mentoring at Musica Viva Australia and workshops with year 12 students studying Carpentaria.

As one Geelong High School year 12 student reflected: “Carpentaria has taught us the necessity of using our privilege to fight for those whose history has been oppressed, which is more important now than ever with society’s changing climate. In a way, Carpentaria has weaponised literature and has inspired meaningful change in a group of young adults who will now go on to instil those messages in others.”

Many others involved in Professor Wright’s many Chair activities have been similarly enthusiastic. Susan Pyke, a teacher in the University’s School of Communication and Culture, wrote to her to say that “having your voice of knowledge present in our learning environment will undoubtedly be a semester highlight for the students and was absolutely a teaching highlight for me. Your work is so vital and so profoundly alive.”

That message further underscores the ways in which the philanthropy of the Boisbouvier-Wylie family is having such a powerful and enduring effect.

“We like initiatives that have got a good multiplier effect to them,” said Wylie, “where you throw a rock in the pond and the ripple goes out.”