The latest Times Higher Education (THE) World University Rankings has placed the University of Melbourne as 32nd globally, again heading Australian universities in the list. 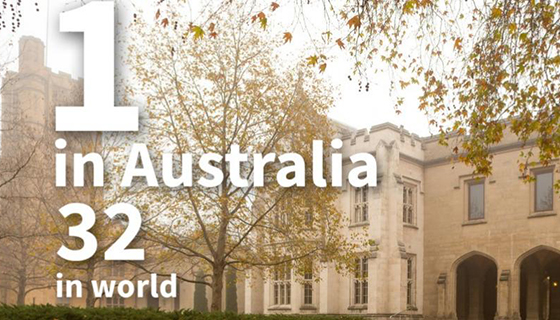 Professor Mark Considine, Acting Vice-Chancellor, said the result in the 2019 rankings is a testament to the University’s continued focus on the highest quality education and research.

"Our vision as a university is to deliver the finest-quality education and to combine this with world-leading research,” Professor Considine said.

“This focus has enabled us to be ranked number one in Australia and retain our number four position in the Asia-Pacific region – a positive outcome that we’re extremely proud to achieve.”

He added that it also reflected the commitment of the University of Melbourne’s staff and students.

“Our staff and students do so much to ensure the University is a vibrant and stimulating place to work and study,” Professor Considine said.

“They have enabled the University of Melbourne to reaffirm its position at the top of these key rankings.”

THE rankings are among the most comprehensive and prestigious in the higher education sector. They are based on five areas of activity: teaching, research, citations, international outlook and industry collaborations.

The result follows a strong outcome for the University in other recent rankings, including sixth worldwide in the 2019 QS Graduate Employability Rankings in early September, up five positions from two years ago.

And last month the University of Melbourne was also named as the top Australian university in Shanghai Ranking’s Academic Ranking of World Universities (ARWU), reaching 38th position globally, up one place from last year.