More than 100 alumni, staff and former staff were honoured for their contribution to Australian society in the Australia Day Honours, with five alumni appointed Companion in the General Division of the Order of Australia (AC) – the nation’s top civilian honour. 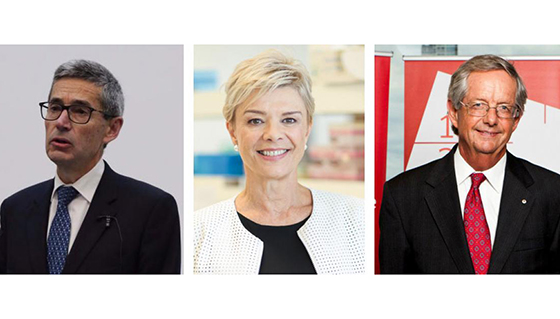 “Congratulations to the 119 University of Melbourne alumni who have been recognised in this year’s Australia Day Honours,” Duncan Maskell, Melbourne Vice-Chancellor, said.

“This is a fantastic acknowledgement of their significant achievements and contributions to society.”

The Hon Justice Geoffrey Nettle AC was recognised for his eminent service to the judiciary, to the law, to criminal and civil appeals reform, to legal education, and to professional standards. Justice Nettle has been serving the High Court of Australia since 2015. He is a former judge of the Supreme Court of Victoria and Judge in the Victorian Court of Appeal. He was appointed Queens Council in 1992.

Professor Kathryn North AC was awarded an AC for her eminent service to genomic medicine nationally and internationally, to medical research in the fields of genetics, neurology and child health, and as a mentor and role model. Professor North is an internationally renowned paediatric physician, neurologist and clinical geneticist. She is also Executive Director of the Murdoch Children's Research Institute. She is a recipient of the University of Melbourne’s Doctor of Medical Science (Honoris Causa).

The Late Emeritus Professor Patrick Troy AC was awarded a posthumous AC for his eminent service to urban and regional planning, to environmental sustainability and social justice policy, and as a mentor and role model. Professor Troy has long been acknowledged as the country's leading thinker in the field of urban policy and is the author of many influential works relating to urban and regional policy. He received an Honorary Doctorate in Architecture from the University of Melbourne in 2005.