The power of performance

For Dr Andrew McAliece (BDSc 1985) and Dr Richard Simmie (MBBS 1978), the decision to support performing arts students, through their lifetime giving and a gift in their Wills, has opened up a whole new world. And for one recipient of their generosity, it’s been an investment in a budding performing arts career. 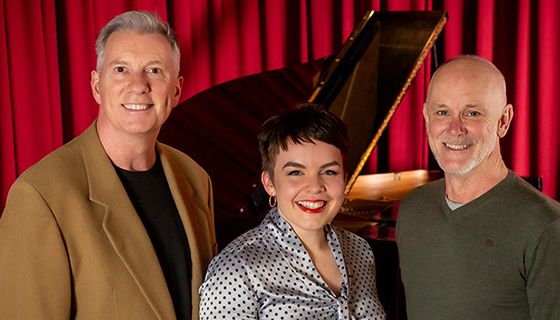 “When you make an investment – whether it’s space or time or money or goods – in the cause of art, it becomes so much more than its mathematical value,” says Willow Sizer, who recently graduated from the University of Melbourne with a Bachelor of Fine Arts (Music Theatre).

She goes on to explain: “Magic is the only word I can think of to describe it. When you support an artist, they’re able to make something. To multiply it. And so, when you invest, it’s not just money anymore; it’s not funds sitting in a treasury somewhere. It’s energy. It’s power. It’s a bit more momentum to the wheel …”

As the inaugural recipient of the Dr Andrew McAliece and Dr Richard Simmie Scholarship for a student of music theatre, Willow appreciates that boost in momentum.

One of four children, she grew up in rural Gippsland. While music was a mainstay in her home – they even had a family band that performed occasionally at festivals and weddings – Willow didn’t stumble into music theatre until moving to Melbourne for secondary school. She received a one-year scholarship, which prompted her to take a chance on music theatre rather than pursuing a Bachelor of Arts at the University.

“It’s really people’s generosity that has shaped my being in the arts, and my entire education,” she says.

For Andrew and Richard, supporting a student’s artistic development is a joy that reflects their shared interests. Andrew, who has owned his own dental practice for 25 years, still works part time. Now retired, Richard spent decades as an anaesthetist at the Royal Melbourne Hospital.

They share a growing passion for the performing arts.

Their enjoyment of the arts has evolved over time, spanning comedy, ballet, opera, theatre and music theatre.

While he appreciated the challenging nature of his career, Richard says: “There is another side of me, and in another lifetime, I think I would have liked to dabble in the arts.”

Similarly, Andrew has always felt the pull of creative writing, devoting his time outside dentistry to honing his craft through writing courses. In 2001, a play he authored ran for three weeks in Sydney after winning a competition.

“I think people should give to their particular area of interest,” Andrew says. “Some people find science fascinating, so they would make interesting connections with scientists by giving to that area. But for us, it’s the arts.”

After becoming donors to the Victorian College of the Arts in the Faculty of Fine Arts and Music, Richard and Andrew sought additional ways to give. They valued the connections they made – and the opportunity to immerse themselves in a new area. “We wanted to explore more and meet a whole different world of people,” says Richard.

That’s when a conversation with the University catalysed Richard and Andrew to establish an annual scholarship for music theatre students. In addition, they have also established a scholarship for future theatre students through a gift in their Wills. In this way, Richard and Andrew’s ongoing support for young students in the performing artists, such as Willow, will continue to flourish into the future.

“We feel that we’ve been extremely fortunate in all the gifts and opportunities we’ve received,” they say. “When you reach a particular age, most people realise it’s time to give back. We’re at that point. If we can help just a small number of people in their journey, then we’re happy.”

Willow says the scholarship did more than give her a sense of financial relief and external gratification for her hard work: “The long-term impact was that the scholarship has given me the flexibility and the opportunity to help others too … It’s had this ripple effect.”

“Giving creates such a positive change. Especially if it’s a scholarship for an individual, it creates more than just change for that one person. It keeps on giving. It’s a really wonderful investment in their future, and it really does positively impact people’s lives.”

For further information about including a gift to the University in your Will, or making a living bequest in your lifetime, please call the Gifts in Wills team on +61 3 9035 3489 or email bequests-office@unimelb.edu.au