Laby Fellow Jacinta den Besten is helping women to believe in themselves and succeed in science. 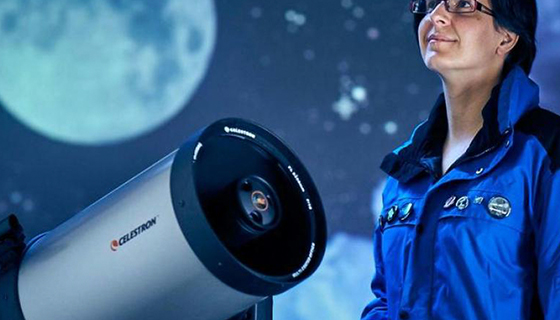 Jacinta den Besten’s favourite conversation comes after students in the Telescopes in Schools program have first explored the night skies with a 12-inch LX200-ACF Meade telescope. In particular, it is the reaction of the girls in the class that both delights and encourages her.

“The program has made me realise I can actually do these things,” girls will tell her. “I can work with complicated scientific equipment and I never thought I’d be able to do a job like that.”

Ms den Besten is the Laby Teaching and Outreach Fellow, supported by the Laby Foundation, and co-ordinator of the Telescopes in Schools program, which targets schools in disadvantaged areas in the north and west of Melbourne and Victorian regional centres.

Schools get the telescopes for three years, and sign up for at least six sessions a year, attended by staff and students from the University’s astrophysics group.

That gender doesn’t matter should be self-evident, but as Ms den Besten knows too well, that’s not the case. She watches what happens when students are introduced to the telescope.

The boys rush in to try it out, while the girls will usually sit back and let the boys go first.

In part, Ms den Besten blames social media and the media in general for perpetuating the myth.

“I think we see those stereotypes more and more,” says Ms den Besten. “Women don’t do physics, they don’t do mathematics.” And parents and teachers are reinforcing it, suggesting girls take the so-called easier route.

"We are teaching them as people not to take risks, not to try hard, not to go beyond their expectations and become amazing people."

Ms den Besten has become a champion for girls and women studying and working in Science, Technology, Engineering and Mathematics – or STEM. Along with co-ordinating Telescopes in Schools, she also heads the University of Melbourne’s Women in Physics program, which supports women in physics, advocates for them and works for cultural change to remove impediments to career advancement within the School of Physics and beyond. The group hosts public talks and panels, to which secondary school students are welcomed.

"There’s no way I would be here without the Laby Foundation."

Ms den Besten adds that by providing opportunities, presenting positive role models and taking University science into schools, girls and parents are seeing what females can achieve in science.