Charging drivers at peak times could be the best way to help ease Melbourne’s traffic woes, according to new research by the University of Melbourne. 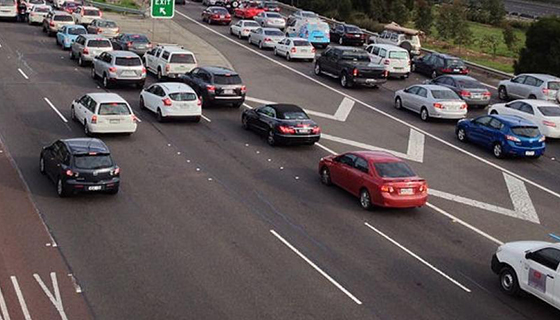 The Eastern Freeway in Melbourne

In a working paper, Can Road Charges Alleviate Congestion?, researchers Dr Leslie Martin and Mr Sam Thornton, from the Faculty of Business and Economics, analysed the economic and social impact of different charges levied on road use in Victoria.

“If designed well, road use charges could help reduce traffic congestion by encouraging people to drive at different times, take alternative routes or use other modes of transport,” Dr Martin says.

The researchers evaluated the results of Transurban’s 2015-2016 Melbourne Road Usage Study that looked at the travel behaviour of 1,400 motorists over an eight-to-10-month period.

The study found a charge on distance travelled reduces driving primarily at off-peak times, but does little for traffic congestion overall. Further research is needed to assess the potential effects of the cordon on traffic as few drivers entered the CBD zone during the study. However, charges that vary according to the time of day did reduce congestion.

“We found that drivers who were subject to a higher cost of driving between the peak hours of 7am to 9am and 3pm to 6 pm on weekdays reduced travel by 10 per cent during these periods. These reductions relieved pressure on local congested roads,” Dr Martin says.

The study did not find any evidence that in the short-term road use charges would encourage drivers to increase their use of public transport.

“Instead we found that motorists responded by being more strategic with their time on the road by linking their trips together,” Dr Martin says.

Dr Martin and Mr Thornton say the research demonstrates that vulnerable groups could win under congestion-based fees. “Our study shows that low-income drivers are the most responsive to road use charges. They are also least likely to contribute to congestion in and around the cordon area,” Master’s candidate Mr Thornton says.

“If charges are appropriately targeted at congestion then there is the potential to better use existing infrastructure, thereby reducing costs while simultaneously generating revenue for necessary infrastructure investments,” Mr Thornton says.