Award winning novelist Richard Flanagan has been appointed as the Boisbouvier Founding Chair in Australian Literature at the University of Melbourne. 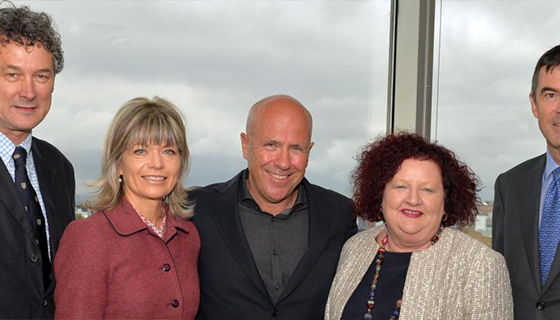 The Chair, which is the first of its kind in Victoria, aims to celebrate and promote Australia’s rich literary traditions and abilities. It was made possible by a $5 million gift to the University of Melbourne by merchant banker and president of the State Library Board, Mr John Wylie AM and his wife, Mrs Myriam Boisbouvier-Wylie.

“We’re looking forward to seeing Mr Flanagan play a key role in promoting knowledge of Australian literature and activities that link two of our greatest cultural institutions in Melbourne – the State Library and the University,” Mr Wylie said.

Mrs Boisbouvier-Wylie added: “Richard is a writer of extraordinary talent. He made me discover and appreciate many facets of the Australian experience and psyche through his beautiful and evocative writing.”

Mr Flanagan is the author of six novels which have all received honours and have been published in over 20 countries. In 2014 he received the prestigious Man Booker Prize for his novel, ‘The Narrow Road to the Deep North.’

“It’s a unique honour unlike any other I know of,” he said.

“I hope I can do it some small justice.

“The Boisbouvier Founding Chair in Australian Literature will allow me to continue writing, but it is also an invitation to create a greater appreciation of Australian writing and writers – their struggles, their achievements, their necessity – within the University and more generally in Australian society.”

Professor Glyn Davis, Vice-Chancellor of the University of Melbourne, believes that Richard Flanagan’s appointment positions the University at the forefront of national conversations about the future of Australian literature in education and the broader community.

“To have one of the nation’s finest writers as the inaugural Boisbouvier Chair is a privilege not only for staff and students, but for all Melburnians.”