President of Ireland, Michael D Higgins, received an Honorary Doctorate of Laws from the University of Melbourne during his official visit to Australia in October 2017. 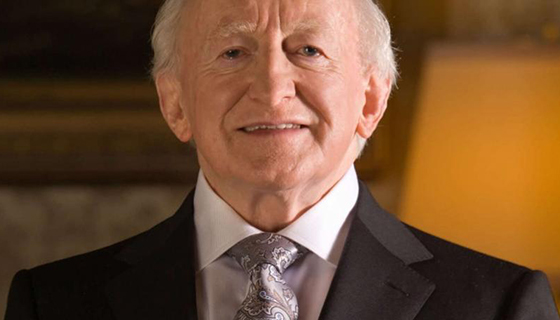 The honorary doctorate recognises his significant role in advancing the arts, humanities and education in Ireland and beyond.

The degree was conferred on 12 October by the University of Melbourne Chancellor Allan Myers AC QC, who said that the honorary doctorate recognised President Higgins’ many personal achievements and his contribution to public life.

“As a minister, he championed the Irish language and reinvigorated the film and television industries. He has been an outspoken campaigner for human rights in his own country and around the world.”

The ninth President of Ireland, President Higgins has been in office since 2011. He was Minister for Arts, Culture and the Gaeltacht from 1993 to 1997 and President of the Labour Party from 2003 until his election as President.

Prior to his political career, President Higgins was a Lecturer at University College Galway and Visiting Professor at Southern Illinois University.

University of Melbourne Vice-Chancellor Professor Glyn Davis took the opportunity to announce the appointment of Professor Ronan McDonald as the next Gerry Higgins Chair of Irish Studies.

“Professor McDonald will join the University in February 2018. His presence in the School of Culture and Communication will strengthen our already significant scholarly efforts in the field of Irish Studies,” he said.

“Melbourne has significant historical links with Ireland and our strong ties will continue. We are particularly looking forward to opening the Science Gallery Melbourne in 2020, a node of Science Gallery International which was established by Trinity College Dublin.”