Partnering with our Indigenous communities

August has been a significant month in the University of Melbourne calendar – with a focus on the important partnerships we share with our Indigenous communities and a commitment to truth telling, constitutional recognition and reconciliation. 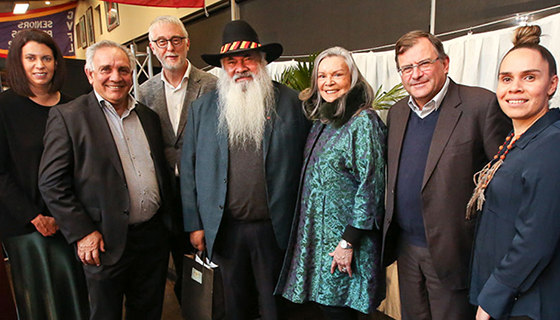 At the beginning of the month, senior staff travelled to Arnhem Land to take part in Garma Festival, Australia’s largest annual Indigenous cultural gathering. The following week saw Vice-Chancellor Professor Duncan Maskell and senior University leaders head back south to the Kaiela Institute in Shepparton for the Dungala Kaiela Oration.

Gathering over 2500 political and business leaders together from across the globe, Garma aims to improve Indigenous disadvantage through engagement with business, politics, academia and other leaders of society.

The University has sponsored Garma for the past two years and for the next three will be principal sponsor of the festival and Key Forum, a global platform for discussion, direction setting and collaboration for the advancement of Yolngu and Indigenous Australians.

The University has a long relationship with the Yolngu people in Northeast Arnhem Land, formalised in 2015 through a partnership with the Yothu Yindi Foundation, says Professor Langton.

“Through our researchers and students, the University has contributed to health, education, cultural heritage, land management and linguistics in the region,” she says.

At the festival, the University announced that it will invest at least $6 million to launch an Indigenous Knowledge Institute for world-leading Aboriginal knowledge, research and education.

Back in Victoria, the annual Dungala Kaiela Oration was delivered by Yawuru leader Senator Patrick Dodson at the Rumbalara Football Netball Club in Shepparton on Yorta Yorta country.

Senator Dodson’s oration, The spirit of this country: perspectives in review and a vision for our future, explored the successes, failures, disappointments and areas of ongoing need for Indigenous people, including reconciliation, land, recognition and public policy.

Senator Dodson also shared his views on the Uluru Statement from the Heart and the need for an Indigenous voice to Federal Parliament to be enshrined in the national Constitution.

Introducing the oration, Professor Maskell highlighted the University’s commitment to the Kaiela Institute, and to the Shepparton community and region as a strong employer and partner in local health, education and research.

“Thanks to a highly successful partnership between the Kaiela Institute, the Rumbalara Football Netball Club and the University of Melbourne, the oration stimulates and inspires the region to be better, to lead, to close the gap and to define the future.”