Sam Voutas is the director of ‘King of Peking’, a Chinese language dramedy shown at the 2017 Melbourne International Film Festival. Voutas talks about his experience as a student at the University and how this experience inspired him towards a career in filmmaking. 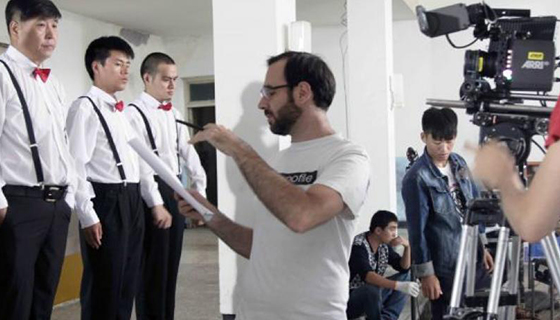 My interest in film stemmed from my time at University: when I began my degree I thought I'd be leaning more towards a major in theatre, but the great thing about the course was that you got to try out different disciplines. I discovered art theory, creative writing, film editing and more. It gave me a chance to see what element of the arts I enjoyed the most. The school building where I studied was on Swanston and Grattan and I remember it had an ancient film-editing machine hidden away in the back of one tiny room. I'd spend hours in there editing between classes. That's how I started to learn how to put a movie together.

The Bachelor of Creative Arts had some of the most wonderful lecturers; professionals in the field who also could tell us about the state of the Australian arts industry. They told us what was working in the industry, and also what wasn't. They spoke about the day-to-day problems; information that was very valuable later when I embarked on a professional career. I also ended up studying a fair bit at the philosophy department, which was a short walk from my other classes and a real eye-opener. I've been a fan of philosophy ever since.

My degree taught me that while the arts may have many different fields, each art form is not a separate entity - they are actually all strongly related. Studying art history fed into my creative writing, which in turn fed into my screenwriting, and that fed into my theatre assignments. They were all ‘art’, it was simply that the expression of that desire to create art was different

I think the reason my career has spanned various areas in the arts, from documentaries to fiction films to graphic novels, is largely due to the concept of interconnectivity which was introduced to early on at university.

'King of Peking' draws in part, from my days at the University of Melbourne and the Victorian College of the Arts. That is where I first started working with physical film prints, first splicing 8mm film together, and then working in 16mm. It was a time where you could hold, smell, and touch film. If you cut the film badly, you would see the physical mark on the print and have to use sticky tape to put it back together. ’King of Peking’ is very much about that period, when the world made the transition from film to digital. It was the end of an era - the end of a time when film was a delicate strip of sequential photographs that you could carry around in a case. Now film is often nothing more than a computer file.

Watch the trailer for King of Peking

The thing I enjoy most about working in the Chinese language is telling everyday stories about people similar to those I've met in China over the years. A lot of emphasis in language studies is placed on learning formal language, but informal Chinese language, the type of language spoken on the streets, has a very distinct flavour and is a really fun space to work in.

The largest challenge facing independent filmmakers in China today is that the definition of ‘independent film’, or the Chinese translation - duli dianying- has progressively had negative connotations. For various reasons over the years, independent filmmaking in China has become associated with notions of something underground or subversive. However many independent films are actually just down-to-earth people trying to tell a simple story about something they’re passionate about - people who want to make art on their own. Some independent films hardly even have a story to begin with! As it stands, you cannot really use the word ‘independent’ in public anymore; it is too potent, too charged. I think that's a real pity, because a name is a very important thing. Once you can no longer name something, what do you have left?

In the future I would like to get my head more around the business side of things. I have spent years focusing on the creative side, but I believe the business side is equally as important. You need both to have a sustainable career in the arts.

If I were to provide advice to those studying arts, I would suggest to study hard, but it is also important to get out there on campus and have a range of experiences. University is not just about learning from books and lecturers, it's very much about having the time and freedom to experience new things and to learn by doing. Don't just be tied to your desk, go out there and try new things. That is why you are there. You have got to try, fall down, and then get back up again. Apply your research to the real world and see what sticks.