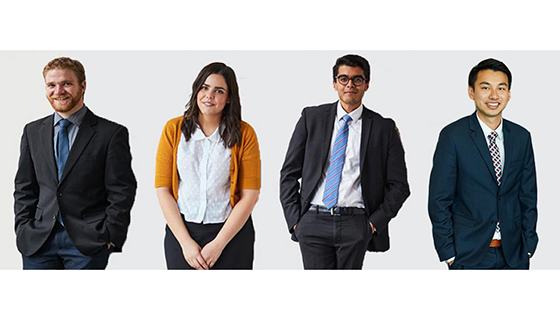 Four students have been given a life-changing opportunity to undertake post-graduate study at the University of Melbourne.

The 22 scholarships, valued at over $2.4 million, provide each student up to $120,000 for research or coursework studies at graduate level, and include a nine-month bespoke leadership development program and up to six months of international study experience.

Susan Bannigan, CEO of the Westpac Bicentennial Foundation, said Westpac Future Leaders come from diverse fields and backgrounds with a common goal – to shape a better future for all Australians.

“From researching spider venoms as potential next generation treatments to combat drug resistance in parasites; to innovating the use of 3D printing to repair ruptured ear drums – the Westpac Future Leaders Scholarship has attracted an incredibly high calibre of talented and driven individuals,” she said.

“All the scholars are passionate about one or more of the Foundation’s focus areas – innovation and technology, enabling positive social change, and strengthening Australia’s ties with Asia.

"Westpac is proud to back them so they can realise their full leadership potential.”

The selected students will also gain lifelong membership to the Westpac 100 Scholars’ alumni to join an incredible group of inspiring leaders.

“Money can help launch a vision but it takes a network of inspired and inspiring people to sustain it,” Ms Bannigan said.

“That’s why every Westpac Future Leaders Scholarship recipient will be part of the Westpac 100 Scholars Network.

“Growing by 100 scholars a year across our five scholarship programs, this network will connect those with bold ideas to build a better future for all Australians.”

The Westpac Future Leaders Scholarship is one of five scholarships offered through the Westpac Bicentennial Foundation. The Foundation will award its 200th scholarship this year, as part of Westpac’s 200th anniversary.