Queen’s College has been honoured with the inaugural Indigenous Oration given by Professor Marcia Langton AM, in a speech that forced attendees to acknowledge the plight of Indigenous children throughout Australia. 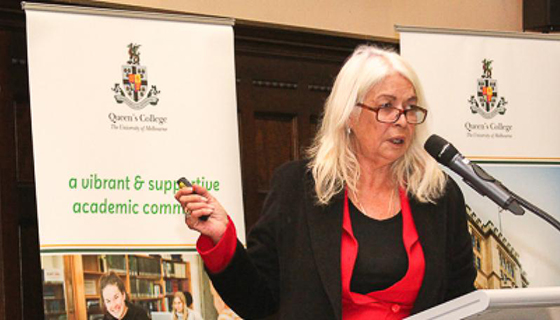 In his introduction to the 21 August oration, Head of College Dr Stewart Gill discussed the reasoning behind the Oration – namely, for Queen’s to engage in public intellectual debate, in keeping with the college’s emphasis on diversity and reconciliation.

After Dr Gill’s welcome, and an acknowledgement of country by the college’s Indigenous Student Support Officer, postgraduate student Tyrone Bean, Professor Langton took her audience through the disturbing statistics depicting the incarceration of Indigenous children in Australia.

The Australian Institute of Health and Welfare’s December 2015 report on Youth Detention stated that across the country, 54 per cent of juvenile detainees between the ages of 10 and 17 are of Aboriginal or Torres Strait Islander descent – a percentage that is rising. In some areas of Australia, the situation is particularly egregious: 97 per cent of children in juvenile detention centres in the Northern Territory are Indigenous, while Victoria is another area of concern. Professor Langton suggested that Victoria’s situation is partly due to the current methamphetamine outbreak in the state.

Discussing the allegedly harsh treatment meted out to such juveniles (such as the use of restraints, tear gas and spit hoods), Professor Langton noted an inevitable comparison of images of Don Dale detainees with those of Abu Ghraib. (Two former Don Dale inmates, Dylan Voller and Jake Roper, are currently pursuing compensation from the Northern Territory Government for their alleged mistreatment.)

Professor Langton briefly discussed the Royal Commission into the Protection and Detention of Children in the Northern Territory, which will table its findings on 30 September 30 2017, before moving to her conclusion that Indigenous children, often the victims of domestic violence, are criminalised by a system that is under-resourced. Discussing Kununurra, in which up to 60 children can be found sleeping under the lights of a Coles car park because their home lives are untenable, she noted the distressing cycle of abuse leading to crime and detention.

The evening concluded with a vigorous Q&A session in which several speakers voiced their concern that the last decade had seen no real political will to work for improvements either for Indigenous children, or Indigenous women (despite recent progress in addressing domestic violence issues). Listening to Indigenous voices, Professor Langton suggested, would be the way forward, rather than imposing – or not imposing – rules on Indigenous communities according to misguided liberalism and ineffectual political short-termism.

The Queen’s College inaugural Indigenous Oration followed a semester one talk on the Palm Island riots by The Hon. Justice Debbie Mortimer. Justice Mortimer took her audience through the discrimination case brought by Lex Wooton following the death in custody of Indigenous man Cameron Doomadgee in 2004.