Australian Aboriginal cultural heritage objects from one of the most important anthropological collections in the world will go on display for the first time at the Arts West Gallery. 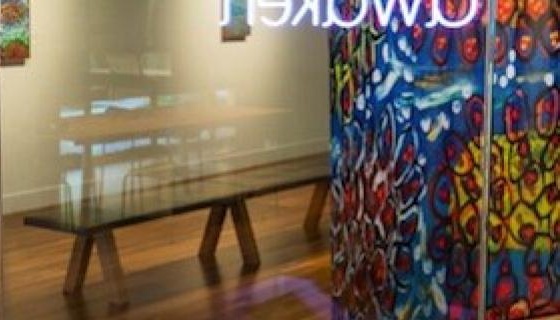 The Awaken exhibition includes almost 200 items from the extensive Donald Thomson Collection, gathered from the diverse communities of Arnhem Land, Cape York and the Western and Central Deserts during the anthropologist’s 50-year career.

Innovative digital labels, including 3D images and virtual reality objects, will enable many Aboriginal people in remote Australian communities to see their cultural objects for the first time.

The exhibition has been curated in consultation with communities, using local knowledge alongside Donald Thomson’s fieldwork notes to awaken the stories of these objects and explore a community’s deep and abiding connections with them.

Dr Lyndon Ormond-Parker, University of Melbourne Research Fellow, said the exhibition highlights the deep relationships that exist between communities of origin and objects held in museums.

“It’s an extraordinary collection and this exhibition is an important moment in the relationship between all these parties. It is a symbol of a new beginning for us, working together to awaken these objects,” Dr Ormond-Parker, who chairs the University of Melbourne’s Aboriginal and Torres Strait Islander Cultural Heritage Oversight Committee, said.

The Donald Thomson Collection includes almost 7500 artefacts and 2000 biological specimens collected mainly on Cape York, Arnhem Land and from the Great Sandy Desert and the Gibson Desert in Western Australia. While best known for his anthropological work, the collection also reflects Thomson’s research and field collecting in botany, herpetology, mammalogy and ornithology.

Donald Thomson’s ethnohistory collection is included in the UNESCO Australian Memory of the World register. Objects from this collection – including field books, a map, photographs and notes – are on display in the Awaken exhibition.

Ms Grieves said the richness of the Donald Thomson Collection lies in how he worked with communities.

“These objects have been interpreted in conjunction with people from the communities of origins and they awaken when they are once again connected with these communities,” she said.

The collection is a generous gift made by Dorita Thomson (Professor Thomson's wife). This, along with the photographic, film and field notes (owned by the Thomson family), have been on long-term loan to Museum Victoria from the University of Melbourne and the Thomson family since 1973.

Donald Thomson’s daughter, Louise Thomson-Officer, said: “My family sees this exhibition of our father's work as a catalyst for a new appreciation of the Donald Thomson Collection, its Indigenous creators and their descendants. The educational focus on object-based learning and research is a perfect context in which we can all explore the depth and breadth of the collection, its significance, relevance today and the infinite possibilities for its future.”

Jessie Bartlett’s family is from the Lake Mackay area of the Western Desert, in Western Australia, where Professor Thomson spent time in 1957.

Ms Bartlett said it was in Lappi Lappi Rockhole that Professor Thomson filmed an Aboriginal man with one leg making a sandal. Both the sandal and the film are included in the exhibition.

“We’re fortunate to have the photos and the film and the objects here,” she said.

“A lot of the people in those photos I had relationships with. My Nanna was in there, my grandfather, my great-grandfather, my Nanna’s uncle. It just brings joy. Not just for myself but for everyone else in my family. It’s a really close connection and we are really fortunate to have all that.”

The Awaken exhibition will be on display at the Arts West Gallery on Professor’s Walk at the University of Melbourne Faculty of Arts until the end of 2020.