The Faculty of Arts boasts an alumni community of more than 70,000 members. These alumni have made a significant contribution to society, both in Australia and overseas. 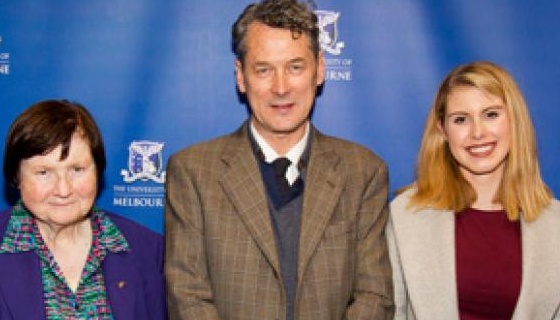 Each year the Faculty celebrates the success of this diverse community by honouring alumni at the annual Faculty of Arts Awards Ceremony.

This year, five alumni were honoured for their contribution across a wide range of fields.

The Young Alumni Award is for an individual under the age of 35, who has demonstrated an outstanding level of professional achievement and community involvement since graduating, or has been recognised by colleagues and peers for outstanding leadership and impact as a global citizen.

In 2017, two alumni received the Young Alumni Award. Tarang Chawla – a Young Australian of the Year Finalist – was honoured for his work to end domestic violence. Tarang founded ‘Not one more Niki’, a campaign to end violence against women and children named in honour of his sister, who was murdered by her partner in 2015.

The second Rising Star Award went to Morgan Koegel, whose passionate advocacy and belief in the power of education has been instrumental in keeping many girls in education. Morgan is the CEO of One Girl – an organisation dedicated to educating one million girls throughout the developing world.

The Leadership AwardJack Heath, the CEO of SANE Australia, was honoured for his outstanding leadership in the government and community sectors, which has resulted in improving the lives of Australians affected by mental illness.

Jack has been involved in mental health advocacy for 20 years, a journey that began with his establishment of the Inspire Foundation – an organisation that provides mental health services and resources to help prevent youth suicide.

The Contribution to the Faculty and University Award

Professor Emeritus Margaret Manion is one of Australia’s pre-eminent art historians, whose scholarship on Medieval and Renaissance art is internationally acclaimed.

As Herald Professor of Fine Arts (1979-95), Professor Manion directed changes in the teaching of art history that resonate to this day. Professor Manion continues to hold many community gallery positions and is a major influencer in programs at the National Gallery of Victoria and the Ian Potter Museum of Art.

Sir James Gobbo was awarded the Lifetime Achievement Award for his outstanding contribution to government, community, the arts, literature, history, law, international relations and the Italian community in Melbourne.

He was a founding member of the Immigration Reform Group (1960), which played a key role in ending the White Australia Policy, and later served as the Founding Chairman of the Australia Council of Multicultural Affairs in 1989.

Sir James continues to serve the community in numerous capacities, including the University of Melbourne as a member of the Melbourne Humanities Foundation Board.

The Faculty of Arts is currently accepting nominations for the 2018 Arts Alumni Awards. Simply nominate through the website and see the list of past recipients.