Two researchers demonstrate the diverse range of research made possible by McArthur Fellowships. 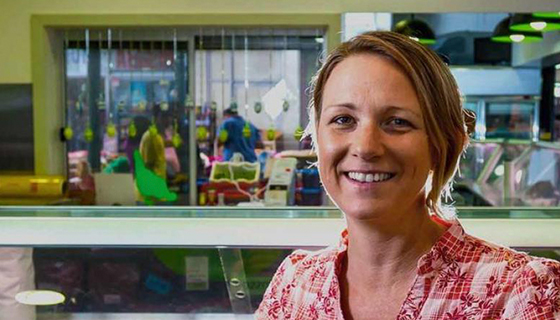 Game on: Wild meat on the menu

On a weekday afternoon, Dr Catie Gressier is standing at a stall amid the hum and buzz of Melbourne’s Preston Market. The anthropologist’s fieldwork has taken her to remote and exotic parts of the world.

While this suburban location may be more familiar, her fieldwork here is just as fascinating. Dr Gressier is observing the stall owner selling wild meat – in this case, a whole deer. As a cultural anthropologist, she is researching the values, practices and beliefs surrounding our consumption – or avoidance – of native and feral meats.

The support she receives as the Thomas and Ruth McArthur Fellow allows her to investigate the stigma attached to wild meats, such as deer, kangaroo and rabbit. Her work is looking at this reluctance to embrace it, despite compelling reasons to do so.

With the world’s population projected to reach around 9.5 billion by 2050, it will also mean an ever-increasing appetite. “There’s just no way we can reconcile that amount of meat with our current production methods,” Dr Gressier says. “We ultimately need to start looking at eating less meat, but the intermediary is looking at alternatives.”

Dr Gressier sees herself in traditional anthropologist territory, looking at broad aspects of society through the lens of food.

She embarked on the path to anthropology when she travelled to Namibia in southern Africa, where her mother was doing volunteer work. She fell in love with the continent.

Her PhD at the University of Western Australia researched emplacement and senses of belonging among the white citizens of the Okavango Delta, Botswana. But despite an impressive career, Dr Gressier was almost lost to anthropology. Unable to secure ongoing work, she was about to take a job in university administration. Then came the McArthur Fellowship.

“I got the phone call and was just ecstatic,” she says. “It is such a unique opportunity. Most junior scholars are swamped with teaching, so this fellowship is hugely coveted because it allows you to consolidate your PhD research, while also establishing a new area of focus.

Particularly for early career women who want to have a family, a research-only fellowship gives you the edge to keep competitive in a pretty tough environment.

“I’m not exaggerating when I say I feel blessed every day in my role.”

Vital support for work in the outback

As every researcher knows, support – both financial and moral – is the lifeblood of their existence.

For anthropologist Dr Cameo Dalley, that began with her grandmother and is continuing today through the McArthur Fellowship.

When she was undergraduate volunteering at the Queensland Museum, Dr Dalley came across a collection of Aboriginal artefacts bearing her grandmother’s name, Mary Dalley (nee Leake).

Dr Dalley knew her grandmother had lived and worked in western Queensland. What she didn’t know was that she had collected artefacts and sent them to the museum.

That interest also extended to helping support her granddaughter’s eventual career. When as an undergraduate Dr Dalley was about to embark on a field trip, her grandmother gave her $600.

Her doctoral research took her to Mornington Island in the Gulf of Carpentaria, where she lived for almost 18 months. Again, the help of others was vital. One morning, there was a knock at her door. “Are you the anthropologist?” the tall, elderly Aboriginal man asked. “Have you got your book? All right, let’s go.”

After completing her PhD, Dr Dalley self-funded visits to the remote east Kimberley region of Western Australia. She wanted to examine local race relations, particularly in light of the proposed closure of Aboriginal communities.

Lately, the help has come in the form of the Thomas and Margaret Ruth McArthur Fellowship. “It’s such an amazing opportunity,” she says. One that, in turn, will help with an appreciation of a momentous change in the communities.

The Thomas and Margaret Ruth McArthur Fellowships were established through the bequest of Dr Annie Margaret McArthur Oliver, a distinguished anthropologist and University alumna.