The University of Melbourne has awarded the Doctor of Laws honoris causa (an Honorary Doctorate of Laws) to The Hon. Al Gore - former US Vice President - in recognition of his efforts to recognise and tackle man-made global warming. 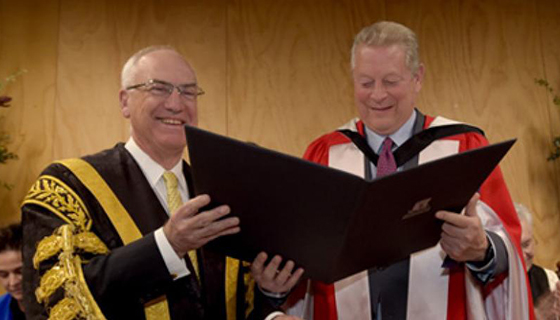 “The University has awarded the Honorary Doctor of Laws (HonLLD) to Mr Gore to recognise his exceptional contributions to public service in an international field,” he said.

“Mr Gore has worked for decades to empower all people to participate in the conversation about effective, urgent and just climate change action.

“During his current visit to Melbourne for the EcoCity Summit, we took the opportunity to award him this degree as recognition of his efforts to promote action and solutions to the challenges of climate change.”

“His visit this week has included a successful research roundtable with eminent professors from across the University to explore the opportunities for research to contribute to the targets of the Paris Climate Agreement,” he said.

Support for his climate science and solutions outreach in Australia is based within MSSI, which is also the host organisation for the Australian arm of the Climate Reality Project.

Mr Gore and the Intergovernmental Panel on Climate Change (IPCC) were jointly awarded the Nobel Peace Prize for 2007, with the Nobel Committee noting “their efforts to build up and disseminate greater knowledge about man-made climate change, and to lay the foundations for the measures that are needed to counteract such change”.

The Committee also noted that Mr Gore is “probably the single individual who has done most to create greater worldwide understanding of the measures that need to be adopted” in order to tackle the climate crisis.

Through effective high level engagement with key governments, Mr Gore was a strong and influential leader for the successful conclusion of the historic 2015 Paris Climate Agreement, the first time that nearly all countries put forward commitments to tackle climate change under ambitious long term goals.