The latest recipient of the Michael Kaufman Scholarship has replicated her father’s achievement in gaining the prestigious architecture scholarship. 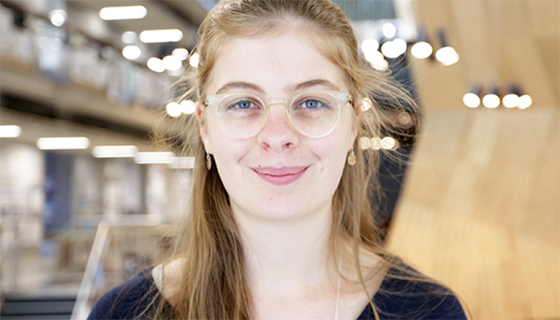 Awarded to high achieving architecture students based on academic merit, the scholarship honours Faculty of Architecture, Building and Planning (ABP) graduate Marius ‘Michael’ Kaufman, who died tragically in 1973 at the age of 26. Michael’s family generously established a scholarship in Michael’s memory in 1984, after the death of his father, Peter Pincas Kaufman.

Since its foundation, ABP has awarded the Michael Kaufman Scholarship on an annual basis to high-achieving students entering the Master of Architecture program. 2017’s recipient is Katja Wagner, whose father David was one of the scholarship’s earliest recipients.

ABP recently spoke to Katja about what the Michael Kaufman Scholarship meant to her and what she had achieved with it.

You started a Bachelor of Arts and after your first semester made the switch to studying Architecture through the Bachelor of Environments. What prompted the change?
When I started at the University of Melbourne I was intent on becoming an art curator, studying art history and languages. I love these subjects and revel in continuing to do as many as will fit into the breadth component of my study plan. However relatively early in my first semester, just before I began an essay debating the virtues and vices of the ‘white cube’ gallery space, it dawned on me that I was studying my interests and not my passion; fields which had some connection or commonality without being it. I filled my essay to bursting with observations and photographs I had taken of European galleries and museums visited on family holidays, fervently arguing that architecture has the capacity to create an experiential understanding which transcends the boundary of the frame or art work perimeter. I was decided.

Your parents are both alumni of the Faculty. What has changed in the Faculty in how architecture is taught to students?
Technology, course structure and the faculty building would probably be the areas which have undergone the most change. My parents (David and Jacqui Wagner) studied and worked on drawing boards until they practiced in London in the mid-1990s when they learned AutoCAD architecture. They also completed five-year undergraduate programs where a Masters of Architecture (which my father did) was quite a different phenomenon to what it is today. Changes in education philosophy have also revolutionised the course structure, enabling much greater flexibility and pedagogical openness. The swift transition I experienced from a Bachelor of Arts to a Bachelor of Environments as well as my enjoyment of breadth subjects are testament to the opportunities inherent in the current structure. In my mother’s final year, she was able to study a fine arts subject which has had a great impact on her lifelong interest in art and design. I can only imagine how the multiple breadth subjects I have taken part in will shape my future experiences and pursuits. Indeed they are already having a significant impact, stimulating my involvement with the programs at the Ian Potter Museum of Art on campus which I very much enjoy.

What impact has the Michael Kaufman Scholarship had on your pursuit of your architectural studies?
I was absolutely delighted to receive the letter informing me of the scholarship. It encouraged me to think with greater perspective about what I find so compelling about architecture and reinforced my conviction to pursue its complexities, potential, splendour and, most of all, its power to transcend normative experience. The Michael Kaufman Scholarship is something that I am sure I will always treasure and which will act as a catalyst for further exploration and experimentation.

How has the scholarship changed your view of the University?
The scholarship I received is the gift of Peter Pincas Kaufman in memory of his son Michael. It was a poignant reminder of how valued the University is by the community in its role in the formation of future practitioners, theorists and citizens. I was impressed by the importance members of the community place on investing in and encouraging students in their study.

Your father was a former recipient of the scholarship. What support have your parents provided you?
​My parents are avid architects, so much so that I began university studying a different course! Without doubt they have been the essential inspiration, influence and support in my pursuit of architecture, encouraging me to push my ideas until they are sound, and to keep on when my determination dwindles. They have taken me to see some very moving and stimulating buildings. One Christmas I remember approaching Zumthor’s Bruder Klaus Field Chapel, set pensively in deep snow in the German town of Mechernich. On entering the shard-like threshold, a raw, undulating interior space was revealed, lit by a constellation of glass globes pierced through charred walls with a jagged oculus overhead through which snow wafted and melted on the waxy floor. Last summer holidays I spent working in their architectural practice which was an invaluable experience and which proved to further cement my resolve.

What has been your favourite subject so far studying architecture?
A highlight of my course thus far has been studying architectural history. I am fascinated by the narrative of space as it morphs and transforms across time, place and culture. This narrative widens my horizons, piques my curiosity and inspires me to work up more complex and sophisticated schemes in my design studios. Architectural history opens vistas into the immense and profound fabric of architectural practice, as it both evolves with and transforms human experience. Architects today are not only inheritors of that legacy, but continue this narrative to create space which serves the community and enhances the richness of the world we live in.

What would be your dream project in your future career?
My dream project would probably be for a client who shares a common commitment to the integrity of space and the power of spatial experience. I think that art galleries and museums are particularly dynamic examples. Museological space which surpasses narration to personify the human story behind the objects and works of art it displays, has tremendous poignancy. For me, powerful architecture not only skilfully facilitates human activity and engages sensitively with context and environment, but communicates on a profoundly metaphysical level in a way that that few other media can.

The Kaufman family's generous gift has enabled success for ABP students such as Katja for more than 30 years. The Faculty is very thankful for the continuous support from its supporters and donors who have helped our incredible students achieve their best throughout the generations. Find out more about other faculty scholarships and prizes and how you can support the faculty with a gift.