The Atlantic Fellows for Social Equity is an Indigenous-led lifelong collaborative fellowship program and platform for systemic change. One of seven global hubs, the Australia, Aotearoa and Pacific Region program was established through the largest gift to the University of Melbourne and the vision of Chuck Feeney, founder of The Atlantic Philanthropies. Nick was in first cohort in 2018 and is now part of the lifelong fellowship.

What does it take for a human to flourish? For Nick Eakin, knowing your story is a good place to start.

“If you know your identity, consider it a privilege. Some people aren’t given that choice.”

For Nick, this is hard-won wisdom. It was his exposure to the Atlantic Fellows for Social Equity in 2018, a life-changing fellowship made possible by the Atlantic Philanthropies, and dedicated to ensuring Indigenous social equality across Australia, Aotearoa and the Pacific region, which helped Nick to reconnect with his identity and better understand the challenges inherent with the concept of identity for Indigenous people.

Taking time out after completing his science degree, Nick spent a few months working at a cousin's cattle station in the Northern Territory, dedicating his spare time to volunteer work in remote Indigenous communities. Finding a passion he hadn't felt in his formal training, Nick eventually secured a role as Sports and Recreation Officer in the Alpurrurulam Community Government Council. Various roles over a six-year span with First Nations communities in remote Canada followed.

Then, in 2010, Nick jumped at the challenge of a leadership role to push for greater social equity on home soil. Joining Jawun, an organisation committed to connecting Indigenous Australia with corporate and philanthropic Australia, Nick had found new purpose.

"What drew me home was Jawun's interesting empowerment model of taking in people who had no previous experience with Aboriginal anything and sticking them into an Aboriginal organisation for six weeks. I thought that was fascinating."

Sustained exposure to and work within Aboriginal and First Nations communities on two continents had given Nick plenty of prior experience. It inevitably raised challenging questions, too.

"You couldn't help but ask, why is there such abject poverty in some of these communities? Why do things keep happening the way they do? Why is the gap (between Indigenous and non-Indigenous Australians) not closing?"

One question in particular wouldn’t let go. "I kept on wondering if this was a learned helplessness."

Seeing how hungry Nick was to find answers as a way to get clear on his purpose, Jawun's then-CEO encouraged Nick to apply for the Atlantic Fellows for Social Equity Program.

Nick was shocked to be invited to join the very first cohort. "When I was told I'd made it, I nearly fell off my chair. I didn't think I was qualified."

From the very outset of the Fellowship, Nick could feel the intensity of the program. The friction of being in close proximity with fourteen other passionate and inspiring community leaders sparked powerful interactions.

"We were in each other's pockets 24/7 for months at a time. That hothouse experience, whilst incredibly challenging, enables you to have hundreds of conversations. And those conversations were challenging. They were supposed to be. All the people in my cohort are the smartest people I've ever met. They're all leaders in their own right, and they were not afraid to speak their truths, sometimes with brutal honesty."

To Nick, that honesty was a gift. Even though Nick had lived and worked in Indigenous communities, he could never truly know their lived experience. No matter how heated those debates became, Nick never viewed them as personal. To his mind, they were simply challenging his thinking in the hope of expanding his views.

"Instead of continually putting my views forward, I learned to shut up, listen and allow the time for others to test their ideas on me. And it slowly started to turn my thinking away from the question I had been asking – 'Is this a learned helplessness?' – to what it should have been from the get-go: what does it take for a human to flourish?"

Our stories need us to tell them

The deepening relationships with his Fellows also revealed to Nick how important our personal stories are in defining our identities.

"We work flat-out on the treadmill of life. Then so many of us hit our fifties and realise we have no idea who we are. It's so important and yet so many of us forget to do it. The Fellowship really enabled me to dive into my heritage and to ask the big questions that sheet back to the notion of personal identity."

"Pairing my search for personal identity with the exact same struggle Aboriginal and First Nations people experience seemed absurd. If I could have my identity and be proud of it, why can't others? This is their country. They're part of this country. They are this country. Yet they are struggling for identity."

This is the conversation Australia needs to have, and one that Nick is facilitating and amplifying with clarity and urgency in his post-Fellowship role as General Manager, Campaign Sustainability with From The Heart. The organisation is advocating for a referendum to have the Aboriginal and Torres Strait Islander Voice to Parliament enshrined in the Australian constitution.

"The conversation about recognition is nothing new. The Aboriginal voice was specifically excluded from the Constitution since the creation of Federation in 1901. There have been any number of Joint Select Committees, Referendum Councils and statements since then. And there's been a bipartisan commitment to go down the path of constitutionally recognition since 2007. All we're doing is ensuring that recognition is achieved." 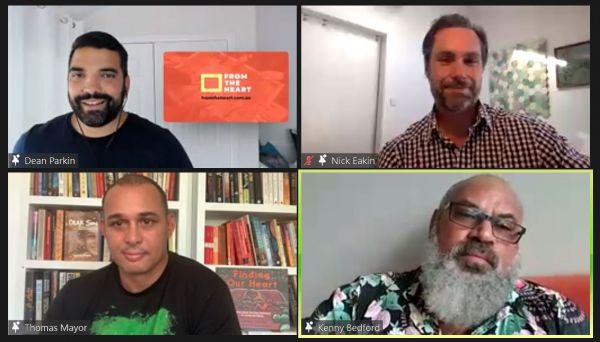 Making time to be heard

The conversation is long overdue. But after more than two decades of working with and for Aboriginal communities, Nick believes a profound shift is beginning to assert itself across Australia.

"Corporate Australia has a genuine interest in and care for closing the gap. Reconciliation Australia, Jawun and other organisations that keep chipping away for Aboriginal communities have had a huge part in doing that. There's definitely a strong commitment from the broader Australian population that this is something we should finally do, too. It's a fair and practical change, and I do think the time is right."

And time is something Nick often thinks on. Without the space the Atlantic Fellows created for Nick to reflect upon his own story, Nick wonders if he might have achieved all he has for the communities he so eloquently speaks for and supports.

"Humans don't tend think of the right answer straight away. It takes a lot of inputs, and a lot of challenges. To be able to sit down and think about something and come up with the right answer over time is a luxury that many people just don't get. For the gift of time and the ability to reframe my thinking to better serve Indigenous communities, I am truly grateful to Chuck Feeney as the visionary and supporter of this incredible program.

“Imagine what the world could be like if we all slowed down, had that time to think and stop racing to the next thing.  We would make better decisions, and spend less time fixing those made in haste."

The Atlantic Fellows for Social Equity is a global program that seeks to create systemic social change built upon Indigenous knowledges and lifelong fellowship, empowering equity change-makers like Nick.

Demonstrating the strength of the partnership and the trust in the University, the $65 million grant made to the University to establish the program in 2016 was the first investment The Atlantic Philanthropies had ever made to directly support Indigenous or First Nations peoples. That grant is the biggest donation in the University’s history and remains one of the largest single philanthropic gifts ever in Australia.

In September 2020, the final chapter for The Atlantic Philanthropies was written, with Mr Feeney and the Board signing the formal documents to dissolve the foundation. After dispersing in excess of $10 billion in grants across the world, Mr Feeney has well and truly fulfilled his lifelong purpose of Giving While Living. The University of Melbourne is privileged to play a small part in this remarkable story.