Law alum David Bailey’s gift to the Melbourne Law School is enabling the Indigenous Law and Justice Hub to lead the way on advocacy,  research and supporting Indigenous students. His support has also  helped secure additional funding from other donors.

When he started as Program Manager at the University of Melbourne’s Indigenous Law and Justice Hub in May last year, Taungurung man Warwick Padgham was excited at having a relatively blank slate: the Centre had just opened and his position, funded through a generous gift by Los Angeles-based law alum David Bailey, was a new one.

Indigenous deaths in custody, land and climate justice are among the most notorious failures of Australia’s legal system. So, it is no surprise these urgent issues figure highly among the reasons Indigenous students say they want to engage with the Hub and study for a graduate law degree (Juris Doctor, JD), masters or PhD.

Padgham plays an integral role in assisting Indigenous students to navigate and provide a human face to the Law School’s processes and procedures.

He is passionate about culturally safe, equitable and inclusive access to legal education for Aboriginal and Torres Strait Islander students and is able to draw on his extensive knowledge and relationships within the University and with the Victorian Aboriginal community to work towards growing the Indigenous cohort and the Indigenous academic pipeline across all Indigenous programs at Melbourne Law School (MLS).

The Hub’s purpose – born out of a MLS review conducted in 2019 – extends even further into criminal justice, climate justice and Treaty-making by bringing together legal experts and community leaders to produce innovative research in order to support Indigenous advocacy and Aboriginal self-determination and self-governance.

“To be able to take a leadership role in the Melbourne Law School and help grow their Indigenous programs is an incredible opportunity,” Padgham said, referring to the impact of the donation by Bailey, an engineering and law alum of the University.

“I enjoy working under the inspiring academic leadership of the Hub’s co-directors, Dr Eddie Cubillo and Professor Kirsty Gover, who are driving change throughout the legal profession.”

Dr Amanda Porter is also a key member, focused on the Hub’s criminal justice research and teaching initiatives. Dr Porter said, “I would not be here without the support and leadership of Associate Dean (Indigenous Programs), Dr Eddie Cubillo and MLS Dean, Professor Pip Nicholson, as well as the love and support of my fellow Hub members, especially Warwick.”

Padgham added: "The support from David Bailey has allowed us all to really drive the influence of the Hub’s vision through my role as an administrative lead."

We are setting structures up to enable our co-directors and allies to produce the research, teaching and learning resources, and continue to engage with the community for real change in Indigenous legal issues, nationwide.

The Hub’s first year has brought many achievements in the face of ongoing challenges of the pandemic, especially in increasing MLS Indigenous enrolments from three new students a year to around 12. Padgham has also overseen successful research grant applications, helped develop appropriately supported PhD programs for emerging Indigenous legal scholars, and extended the Hub’s sphere of influence through University-wide relationship-building.

Among the generous support pledged so far, the Hub has welcomed a $100,000 gift from The Atlantic Philanthropies to develop community-driven legal projects led by sovereign Yolnu First Nation peoples in Arnhem Land. Another $100,000 has come via the University’s Indigenous Knowledge Institute to support research into the intersections of health and justice services in Aboriginal community-controlled organisations. An additional $35,000 grant from the Mannifera Foundation is underpinning a research project with the First Peoples Assembly of Victoria. 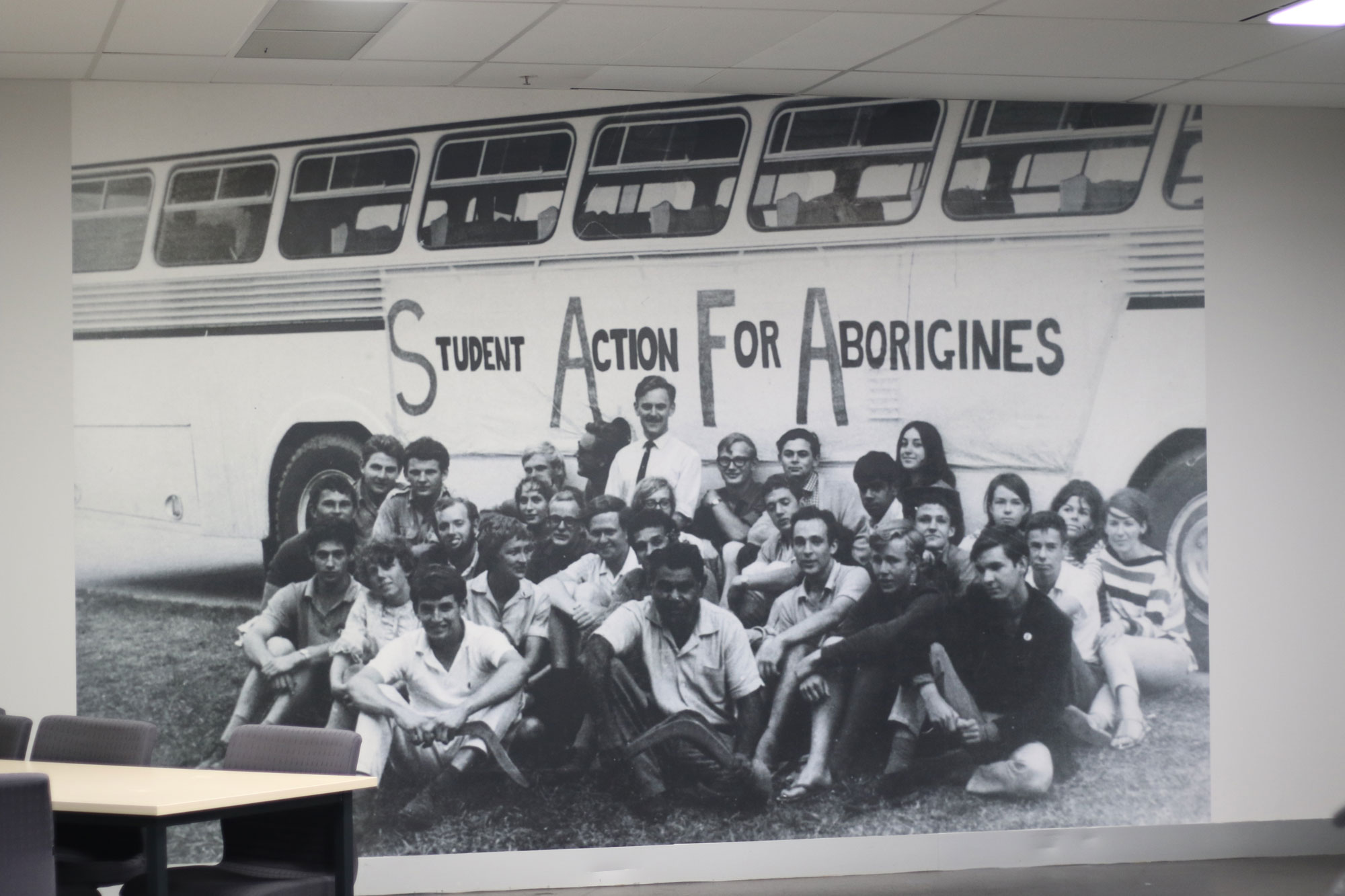 Mural outside The David P. Derham Theatre at MLS featuring students involved in the Freedom Ride, a demonstration against discrimination of Aboriginal people in Walgett, NSW. Photograph reproduced with permission of Wendy Watson-Ekstein.

“The growth in student numbers, and getting the grants going, have been personal highlights... I’m looking forward to getting back on campus and feeling the energy of face-to-face engagement, which I thrive on – and putting all the groundwork into practice and getting more research and other programs going."

Professor Nicholson is full of praise for the generous support of the Hub by alumni and others. “I look forward to seeing the further outstanding research, discussion and debate generated by the Hub and its growing community of scholars and students,” she enthused.

Padgham insists that philanthropy is a critical elixir in driving work that would otherwise not be undertaken.

“David Bailey has been incredibly supportive and hopefully, can see what the investment means in terms of the growth of the Hub,” he said. “I am very thankful for that, but my role really is helping the people that know the discipline to get along with the work, rather than getting bogged down with administrative and governance issues. That [philanthropic] support can allow the Hub to run like a well-oiled machine.”

The impact of giving

Conceiving and developing research, and making results accessible to communities, is a major impact of the philanthropy, Padgham said, but so too is creating the social capital that comes from studying at the MLS, enabling pathways to develop important networks.

“It can’t be underestimated, particularly for Indigenous students,” he said.

Dr Cubillo and Professor Gover are keen to see the Centre leading change in advocating with – and for – Indigenous communities to “overcome the unconscious biases that are entrenched in our white settler law and its legal institutions, our legal teaching institutions and the Australian community”. "I hope the Hub can shift the curriculum of our law students from the teachings that the justice system is ‘fair and just’ and represents impartiality, to a more open teaching of how the white settler legal system is a historical construct of systematic racism enforcing inequality," said Dr Cubillo, who is also Associate Dean (Indigenous Programs) and Senior Research Fellow.

Professor Gover said that because the Hub puts its intellectual and material resources behind Indigenous leadership, it upholds the principle of Indigenous self-determination, with its work driven and led by Indigenous goals and Indigenous peoples. “It’s important to us that the Hub exemplifies Indigenous ways of doing business,” she said. “We try to make sure everyone gets a say, take care of one another, and we involve our Indigenous students and up-and-comers in everything we do.”

Padgham and colleagues last year met with Indigenous applicants for the 2022 JD program to get insights into their background and experiences, and why they wanted to study law.

“It was a great process with a lot of support from MLS,” said Padgham.

I think a lot of the people coming into the JD don’t necessarily have a vision of going to work in a corporate law firm – they are eager to see how they can use a law degree for community benefit.

“There’s a whole range of ways in which that can happen, from criminal justice or Treaty, to going back to work with their communities, all over the country. I don’t want to talk for them, but it seems as though they have this responsibility to make sure that because of who they are – their connections to family and community and the histories that go along with that – they feel like they can make a bigger difference through a JD."