Many in the University community have heard of the colourful office on the eighth floor of the Law School building, but even more know the lecturer who occupied it for years.

After an eventful 35 years at the University, Professor Malkin has retired from his teaching career, but his impact on the school and his students remains.

Professor Malkin is well known for his passionate teaching style among his colleagues and students – a passion which never wavered over the years.

His Melbourne Law School (MLS) colleague and friend Professor Jenny Morgan said, “Ian remained enthusiastic about teaching throughout his entire career. He took it very seriously and often questioned whether he was still doing a good job – despite how engaged his students were.”

Throughout his teaching career, Professor Malkin used small habits and gestures to ensure his teaching environment was as friendly as possible.

“To me the most important thing as a teacher is creating a safe environment for students,” said Professor Malkin. “Whether it's in a classroom or on Zoom – creating a place where students can voice their opinion and be part of a group.”

Making his enthusiasm known to students was also important to Professor Malkin. “I have always arrived at class at least half an hour or 45 minutes early so I can welcome students as they come into the room.”

Professor Malkin was never afraid to go the extra mile for his students and offered moral support to his students when they needed it most.

“I recall a student once said to me, ‘Ian is the Velcro of the Law School’. When students had self-doubt or felt out of place, he kept them from dropping out,” reflected his colleague Professor Morgan.

“You want to empathise with that student and recognise that what's been thrown at them is all new and challenging, and it's not easy."

“For many students, the University, let alone the Law School, can seem like a really scary place” said Professor Malkin.

Professor Malkin took his approachable classroom demeanor and applied it to his many roles at MLS – including as an LGBTIQ+ Liaison Officer.

One aspect of the role was organising events with guest speakers. “I remember one speaker was a graduate employed at a law firm who had come out – and he talked about what it was like being in the workplace at the time.”

While Professor Malkin was guiding LGBTIQ+ students through their time at the University, he too was on his own journey.

“I didn't come out until my second or third year at the University, and that was to one particular colleague,” he shared. “Visibility was probably one of the important things I felt I had to offer.”

Even in more public forums, Professor Malkin voices his opinion on matters affecting the LGBTIQ+ community.

“When I was chair of the Teaching and Learning Quality Assurance Committee, it was during the period of the marriage equality debate,” he said. “One of the matters that came onto the Academic Board agenda was whether the Board should take a position.”

Professor Malkin was nervous to share his position at first. “I did speak up and got a very positive response from other senior people at the University which was very gratifying. But I have to emphasise that I wasn’t alone in speaking up and most of the Board held similar views.”

Having witnessed significant progress in LGBTIQ+ representation and rights since entering the workforce in the 80s, he knows diligence is just as important today as it was back then.

“I do think we shouldn't lose sight of hard-won battles that could be lost again very easily,” he said. “We must be visible, strong, supportive and vigilant.” 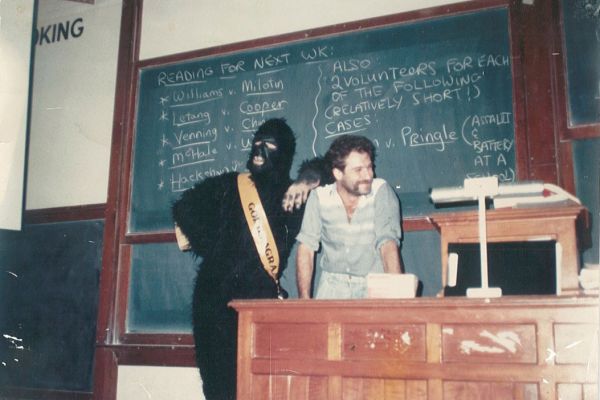 Professor Malkin receiving a Gorillagram for his 30th birthday while teaching one of his classes.

Another hat Professor Malkin wore was curriculum design. He advocated that teaching and quality of curricula were equally as important as other endeavors, such as research.

“I’m proud of shaping the possibility that there could be teaching specialists, and the recognition of teaching as important,” he said.

In 2021, the year he retired, Professor Malkin was awarded the inaugural national “Excellence in Teaching – Lifetime Career Achievement Award” by the Australian Legal Education Awards.

Among his achievements in this area was his development and implementation of the Law School’s then new Bachelor of Laws (LLB) curriculum. “When I was associate Dean of the LLB program, that was something I was pretty proud of because we achieved a lot of curriculum policy development work.”

He was also instrumental in designing the framework for the Juris Doctor degree.

Upon reaching his 25-year milestone at the University, Professor Malkin decided he wanted to share something more with the school that he held such an affinity with.

“There was a philanthropic gap that would serve the kinds of objectives I was interested in – a scholarship for students considering internships” he said.

The Ian Malkin Internship Scholarship was established soon after, supporting Melbourne JD students who wish to participate in internships with not-for-profit organisations or government organisations through a financial grant.

Professor Malkin said he has always been very conscious of “unequal playing fields” and the significance of opportunity and privilege since a very young age.

“How do we compensate for systemic inequality? I guess that question has been an on-going motivating factor for me in a lot of what I do.” 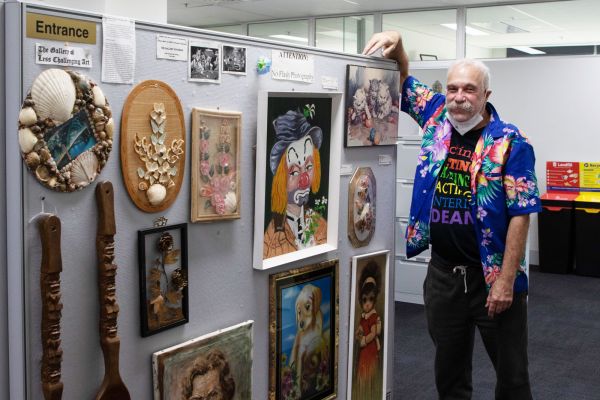 Professor Ian Malkin with the 'Gallery of Less Challenging Art' at the Law School.

Near the end of Professor Malkin’s tenure, his well-established teaching style was turned upside down – as was the entire world.

“Towards the middle of March 2020, we all suddenly thought, ‘what the hell's going on?’ We had started semester-based teaching and it'd been maybe three weeks into it when we were thrown off campus,” he said.

“While on-screen, I had to make sure I was as enthusiastic as I would be in a classroom – leaning into the camera, using a loud voice, being extra bossy and directive, and using my hands a lot on camera in what might seem like rather exaggerated gestures,” he shared.

“I missed the whiteboard a lot, I've got to say! But I loved the breakout rooms – my go-to aid for virtual teaching.”

Professor Malkin’s last teaching class was in 2021, and the ongoing unpredictability of the pandemic kept him on his toes until the very end.

“It was funny because we were on Zoom and towards the last 15 or 20 minutes, all of a sudden, I saw faces pop into the screen – and that was about 100 colleagues who joined the class.”

One of those colleagues was Professor Morgan. “Even though his final class with the University was online, his enthusiasm was unabated,” she said.

The Deputy Dean of MLS Alison Duxbury – who was once a student of Professor Malkin herself – read a speech to the hundreds of students and colleagues in attendance, honoring Professor Malkin’s contribution to the school over 35 years. “I think I cried the whole time,” said Professor Malkin.

Retired but not removed

With his teaching, curriculum writing, and mentoring days behind him, Professor Malkin stepped into retired life with ease.

“It's weird how a day can disappear without really having done anything. I've been walking the dog four times a day,” he said. “The little dear was my saviour during COVID, and always, in fact.”

“I’ve been spending most of my days lately seeing the physio, the GP, and the endocrinologist, so if you want to find me, I'll be at some medical or allied health professional's office. Or the chemists.”

In actuality, Professor Malkin hasn’t quite been able to shake the University, and still jumps at opportunities to get involved.

“I’m currently part of a small committee that’s working through the curriculum with colleagues to further embed Indigenous related issues and knowledge into the core curriculum,” said Professor Malkin. “So far, it’s been a really gratifying project.”

Professor Malkin continues to find ways to connect with the University from attending Open Day to joining panels for scholarship selection.

“I do think it's an extremely collegiate environment and I think it's been that way for many, many years,” he said. “I'd say it's almost like a family.”