For over 65 years Nancy Millis (1922 - 2012) was a trailblazer for women in science. A talented and passionate microbiologist enraptured with fermentation science, Nancy was one of the first women to receive a Bachelor of Agricultural Science from the University of Melbourne in 1946.

The 2017 recipient of the medal is alumna Associate Professor Kerrie Wilson (PhD 2004), who is the Director of the Centre for Biodiversity and Conservation Science at the University of Queensland. 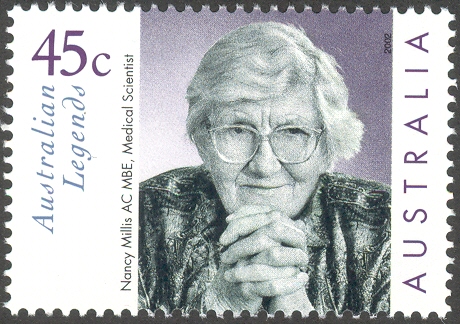 It’s a long way from Nancy and her student days, when she completed her Masters in Agricultural Sciences specialising in soil organisms, and then her PhD at the University of Bristol in microbial growth and fermentation.

Fascinated by yeast, Nancy returned to Melbourne hoping to work in one of the state’s top breweries. Instead she found herself at the University of Melbourne at the beginning of her longstanding career in microbiology research.

It wasn’t long before others were infected by her enthusiasm, teaching abilities and rare potential to develop a new stream of research. She became one of the very first women appointed to Professor in 1982.

Nancy Millis made an outstanding contribution to science through her work in microbiology, and tirelessly promoted the role of women in science.

The medal has been awarded since 2014 to outstanding mid-career women scientists.

For further information regarding the Nancy Millis award please visit the Australian Academy of Science.