Averil had her heart set on studying at University. There was only one problem: the cost. 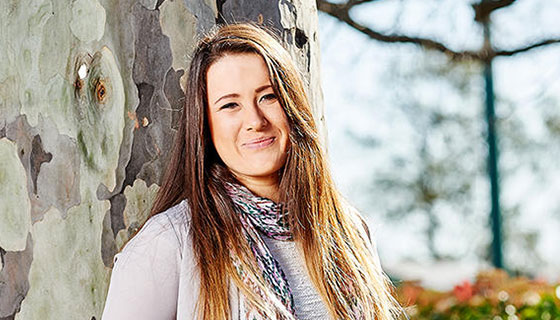 Averil Astall had her heart set on studying at the University of Melbourne. Her older brother had studied there and she’d made the trip from Bendigo to visit him several times. “I absolutely loved the campus,” she said. “My brother was living at St Hilda’s College and it seemed so vibrant. I decided that if I was lucky enough to study at Melbourne, I’d want to live there as well.”

There was only one problem: Averil’s family couldn’t afford to pay for her to live in Melbourne. “My dad would have tried to find the funds to keep me here for one year, but that was all he could do,” she said. “After that, I don’t know what would have happened.”

Thankfully Averil received the Amy R Hughes Scholarship. Established in 1994, the scholarship is awarded to academically promising women who would otherwise be unable meet the expense of attending the University (or one of its residential colleges).

“Living at St Hilda’s while studying has made such a difference,” Averil said. “Within the first week, I’d made friends. Doors are always open if you want a chat and I also have access to tutors, who provide lots of extra support.

“Without the scholarship I’d still be living at home and having to commute each day for classes. It would be quite a lonely experience. Travelling such a distance each day would have meant far less time and energy to study. Plus, there would be less opportunity to make friends and to get involved with events on campus."

Averil enrolled in the Bachelor of Environments because she was interested in architecture and the built environment. “One of the great things about the Melbourne Curriculum is that you get a taste for everything before you have to choose which area to specialise in,” she said. “I discovered pretty early on that my real love was engineering. I don’t think I would’ve come to that realisation if I’d been studying at another university.

The scholarship has helped me to immerse myself in life at Melbourne. Because of it, I know that after I graduate I will definitely try to stay in the city and succeed in my field. Words cannot express how grateful I am to my donor for giving me this opportunity.

Back to scholarship stories